The Art of Climbing Mountains 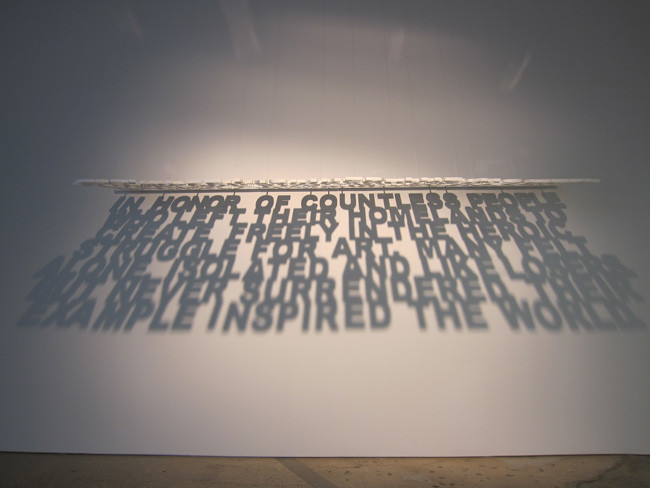 303 Gallery presents "The Art of Climbing Mountains," a group exhibition inspired by an excerpt of René Daumal's " Mount Analogue" published in 1952. The works in this exhibition investigate a variety of positions and possibilities addressing the challenges of life and the way in which one addresses these challenges - surreal, metaphorical and otherwise. Daumal, the French Surrealist writer, was known for his allegorical novels and translations of sacred Buddhist texts.

"Shading Monument for an Artist," 2001-2011, by Cevdet Erek, works with migratory nature of the contemporary art community that moves individuals away from their homes in order to participate. Erek's sculpture comes out of the wall and functions as an awning. The awning is cut in a way that its shade reads as an adapted text from monuments for International Brigades of the Spanish Civil War built around Europe. IN HONOR OF COUNTLESS PEOPLE , WHO LEFT THEIR HOMELANDS TO , CREATE FREELY IN THE HEROIC , STRUGGLE FOR ART. MANY FELT , ALONE, ISOLATED AND LIKE LOSERS. , BUT NEVER SURRENDERED. THEIR EXAMPLE INSPIRED THE WORLD. "Triptych" (2010) by Mike Nelson, who represents Britain in the 54th Venice Biennial this year, is a wooden platform with a small set of stairs and a trap door. It is preceded by several oriental carpets and a pile of rusted chains. This work functions at once as a stage, the platform of a gallows, and a preacher's podium - diverse possibilities that can potentially co-exist in one mind. Joel Shapiro's formal experimentation walks the line between abstraction, representation, and utility, its purposeful ambiguity a window onto the viewer's expectation and perception.

A new painting by Adrian Ghenie, characteristic of his practice, borrows from art & cinema history to create a suggestive imaginary that is cryptic, yet disarmingly familiar.

Adrian Lara's set of five constructions, "23690," takes photographic exposures of common every day objects in her studio that have been scanned. The image includes the scanner bed, another found object. Lara modifies her wooden frames so that they both contain the work as well as transfer additional information in the representation of numbers. Each "number" can be arranged in any order each time it is installed - which effects the overall five digit number, altering the final reading. Our interaction with the possibilities presented creates different outcomes.