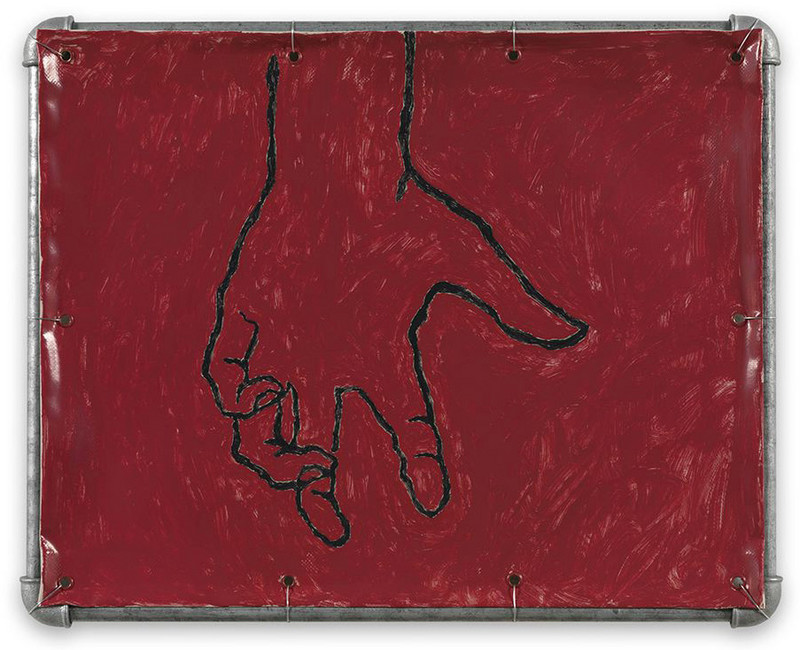 303 Gallery is pleased to present our third exhibition of new work by Valentin Carron.

A man comes home from a day at work, removes his belt, and throws it onto a stool. The belt unfurls itself coming to rest dangling from the stool, frozen in the insipid elegance of the gestural. In the work of Valentin Carron, this everyday apologue becomes a series of assemblage sculptures consisting of exquisite glass casts of men's belts tossed onto pieces of found furniture. Existing in the strange interstice between the domestic and the sacred, these tableaux appear charged with a familiarly disorienting emptiness. The torsion in the pseudo-baroque elegance of the belts is now cast in glass, freezing and robbing them of their potential poetry. They billow onto their de facto prefab pedestals, abject scraps of consumerism acting as supports in Carron's allegorically imbued still lives. The belts themselves become monuments for the delicate and insidious skein of masculinity in the face of a designed world. Man becomes vulnerable to his surroundings, to failure, to repeating the same gesture again and again. He is interred into a negotiation between his Nietzschean virility and the self-effacing dead end of the functional.

In a series of paintings, Carron mines the vernacular of modernist banality and its psychic, emotional, and behavioral implications. Details of found motifs selected from the covers and spines of industrially produced cloth and leather-bound books of the western postwar period are projected onto PVC tarpaulin and painted with vinyl ink. These motifs were meant to inspire and evoke the abstract promise of the future, a promise as yet unrealized. Though there is a nobility in the optimism of using formal means to translate a mass-produced consciousness, in the face of reality it is impossible not to see them through the lens of pathos. Even the process itself flattens the dimensionality of what is traditionally thought of as "painterly," rendering with pungent desolation these contemporary hieroglyphs of failure.

Valentin Carron lives and works in Martigny, Switzerland, where he was born in 1977. In 2013 he represented Switzerland at the 55th Venice Biennale. Major presentations of his works were realized at Kunsthalle Bern (2014), Palais de Tokyo Paris (2010), Kunsthalle Zürich (2007), Swiss Institute New York (2006), Centre d'Art Contemporain Geneva (2004), Chisenhale Gallery London (2006) and Mamco Geneva (2001). Catalogues were published on the occasion of Carron's exhibition at the Swiss Pavilion 55th International Venice Biennale (JRP/Ringier) and his recent solo exhibition at Kunsthalle Bern. A monograph of the artist's work was published by JRP/Ringier in 2011.
www.303gallery.com