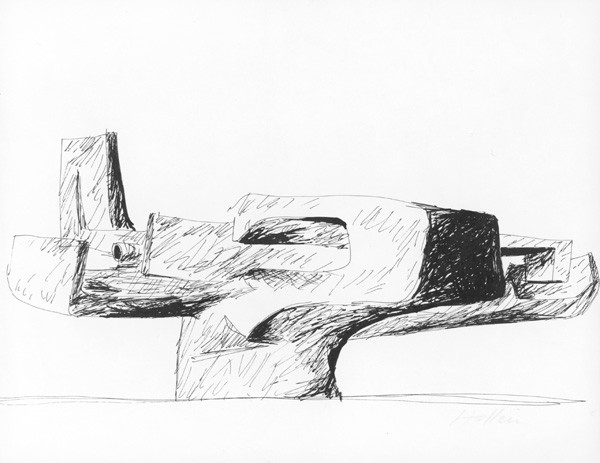 Hans Hollein is more than an architect. He is an artist with a comprehensive understanding, placing his conception of art and architecture in direct relation to inquiries of human activities and situations. “Everything is architecture” builds on the connection between art and everyday life, from which within the 20th Century, has lead to the development of the international definition of “Design”. Starting from this modernist term Hollein acts in an artistic and anthropological way of thinking which includes architecture as generic spatial art.

A new look at Hans Hollein: this exhibition displays the Viennese designer, artist, writer, curator, and architect of Museum Abteiberg, in new perspectives. On the occasion of Hollein’s 80th birthday, we reconsider the groundbreaking projects of this architect and curator that lead to medial and interdisciplinary thinking. We also reconsider anthropological ideas about architecture and design and his proximity to Pop Art or Joseph Beuys. The exhibition was designed in collaboration with the Berlin-based architect and curator Wilfried Kuehn, integrating new research approaches of modern architecture and art history and exhibits for the first time many materials and documents from the Hollein studio, exhibited in the display of his proper architecture, his first large building project.

Hans Hollein (born 1934) was one of the key protagonists in the debates around architecture and design in the 1960s and 1970s. Hollein, along with Oswald Oberhuber and Walter Pichler, editor of the Wiener Zeitschrift BAU in the mid 1960s and represented a new international generation that was engaged in radical analyses of architectural modernism and modernism in general. Hollein was already a public figure, present in the media and at early conferences, receiving commissions for the Richard Feigen Gallery in New York and the viennese stores Retti and Schullin, and acting in the format of experimental exhibitions as an artist, designer, and architect. Before the first major museum commission in Mönchengladbach, he became - with the mediation of Joseph Beuys - in 1967 a professor at the Düsseldorf Art Academy. In the same year he published his seminal text, “Everything is architecture” and right there his relationship to Johannes Cladders, then newly appointed director of the Municipal Museum in Mönchengladbach and curator of Beuys’ very first institutional exhibition began. Three years later Hollein created his seminal anthropological exhibition “Everything is architecture: An exhibition on the theme of death”, in the old museum building on Bismarkstrasse.
Two years later Cladders commissioned Hollein with Museum Abteiberg, as a direct curatorial offer, without any announcement for a competition agreed by the council of the city of Mönchengladbach.

The architecture of this first building, a museum architecture, is now the space and context of an exhibition about Hollein. We requote “Everything is architecture” here, recalling the complexity and wholeness of Hollein and an entire architectural generation that got – with some rather controversial and questionable terms - branded in the 1980s as “Postmodernism”. This exhibition intends to recall the cultural and historical time of the 1960s in its original critique of modernity, the occurrence of historical self-reflection, the social emancipation which happened before the aesthetically defined Postmodernism in design and architecture (for example, Structuralism and Anthropological theory, literary criticism of Leslie Fiedler, Cross the border – close the gap, 1969, the architectural criticism by Robert Venturi in Complexity and contradiction in architecture, 1966, and Learning from Las Vegas, (with Denise Scott Brown and Steven Izenour), 1972, were Hollein’s contemporaries).

Hollein’s media and journalistic work, his visions of the future such as the ever-available “mobile-office” and new urban landscapes, housing and living capsules, partly futuristic ideas, partly atavistic and archaic recourses on the excavated space (space as a cavity) , get visible in their seemingly paradoxical parallelisms.

The genesis of Hollein’s work is getting more logical and plastic through a reconsideration of his biography and an approach to his historical conditions and starting points. In addition to coming from a mining family (which relates to Hollein’s concept of a museum as mine), the postwar experience in Austria and his following travels, his postgraduate studies in the 1950s, the outbreak of the ruins in Vienna led to travels and a fellowship in the USA. In 1958, he traveled across America for 2 years, and established contacts with leading architects, including Philip Johnson who later acquired some of his drawings which are now in the possession of the MoMA. Previously unpublished reports from this trip, as well as many drawings, sketches, collages, and objects, represent the early years in Hollein’s architectural development, including his discovery of the “Architecture without Architects”, the archaism of the Pueblos, his simultaneous affinity for Pop and Science Fiction, his mediation of architecture as a form of design and communication. Also on display are the striking sculptural moments of his drawing and a general importance of this medium, see the anamorphosis of warship and city (aircraft carrier), or the one of woman and landscapes, as well as the many design studies for architectural spaces and their details,. There are lots o early studies, e.g. for church buildings, which put forward to future leitmotifs on architecture as a metaphor, as a language, as both an action and sanctuary.

Designed in collaboration with Wilfried Kuehn, this project is not merely a retrospective and neither architectural exhibition in the traditional sense, but rather an essayistic project showing Hollein’s work, his background and the influences on his thinking as well as his effect on the following trigger of the boom in international museum architecture (Frank O. Gehry, 1997: “There would not have been Bilbao without Mönchengladbach”). Hollein’s influence is also seen on the architecture of the 1980s and 1990s, leading the way for the globalization of today’s architecture. The material from the collection of the studio provides recaps, and fields of new research are already visible, portrayed in their acute approach.

The exhibition “Hans Hollein: Alles ist Architektur.” is being prepared in cooperation with MAK - Austrian Museum of Applied Arts / Contemporary Art where under the title “HOLLEIN”, a further exhibition will be held that revisits the work of Hans Hollein as architect and designer, 25 June to 5 October, 2014. In Vienna, a new series of photographs by Aglaia Konrad and Armin Linke will create a contemporary view on Hollein’s architecture. Hollein’s work as an exhibition designer will be documented as well.

At Museum Abteiberg the exhibition will be introduced and accompanied by a complemetary 60-page booklet with text and images. A co-publication with MAK will follow in June 2014 with new photographs of Hollein's buildings taken by Aglaia Konrad and Armin Linke, that gaze towards the theme of Hollein’s original ideas and his future influence that we see today.

This exhibition is realized with generous support from the Kunststiftung NRW (NRW Art Foundation the Hans Fries Foundation, the NEW AG, Stadtsparkasse Mönchengladbach and other corporate and private donors.
www.museum-abteiberg.de