In Order To Join - Political In a Historical Moment 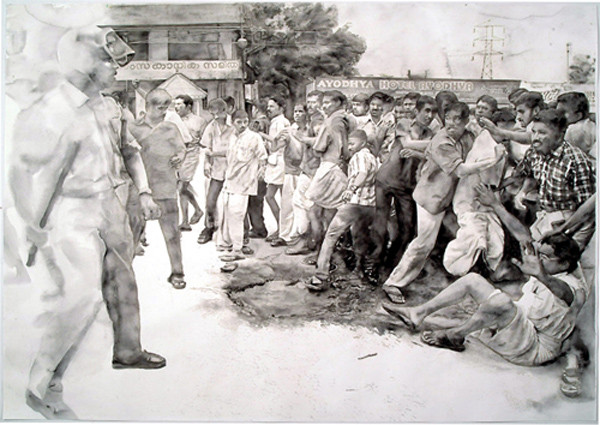 This group exhibition brings together artists born between 1947 and 1957. This bracket of time has been intentionally selected to study work made by women artists born in the postwar, post-Partition era who engage with a political framework that addresses concepts of nationalism, institutions, and questions of their own positions by creating complex interpretations. These artists have practices that enter and depart from dialogues with but are not positioned within Western canonical frames such as Modernism, Abstract Expressionism, Minimalism, Pop, Performance Art, or the even the Feminist movement of the 1970s; they are the “in-between”, sitting alongside but very much present. This ‘instability’ is due to the nature of their work, choice of media and the concerns that have run through their practice; there is a dominance of conceptual strategy and thinking, and ultimately, they are both working with and against the possibility of ‘joining’.

We have taken the work of the Indian artist Rummana Hussain (1952-1999) as a key or opening position in order to consider how one responds to a rapid moment of political change. Hussain’s work emblematizes the effect that globalization had in Bombay/Mumbai in the 1990s, leading to a re-establishment of conservative values, traditions and an artificial nationalism with a need to identify an “Indian-ness” to which she could not belong. The title of our exhibition is taken from the exhibition that Hussain held at Art in General, New York, in 1998.
With this starting point, we aim to bring these acts of artistic positions of the “in-between” generation that operated in the midst of social upheaval into a generational consideration. This generation indicates signs of social liberalization and emancipation; they were children when the Cold War began and adolescent and young women in the 70s during such moments as the Vietnam War, the oil crisis of 1973, or Indira Gandhi’s Emergency regime between 1975-1977. They are also the first generation that began the experience of a global identity. In creating historical discourses for histories that are or have been neglected, our exhibition considers the work these artists made in the early part of their career or the work that represents a turning point. Whether their work can be read as overtly activist or poetic, the positions they begin with are founded in a political stance and space.

The exhibition is supported by the Kulturstiftung des Bundes, the Ministry for Family, Children, Youth, Culture and Sport of the State of North Rhine-Westphalia, and private funders.

“In Order to Join” will tour to Dr. Bhau Daji Lad Museum, Mumbai, 1 November to 14 December, 2014. There will be a workshop in association with KHOJ Workshop, Delhi in December 2014.
www.museum-abteiberg.de