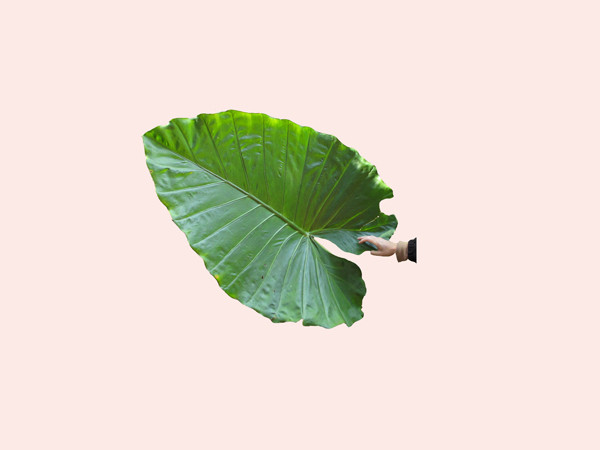 This exhibition is the first by Katarzyna Przezwanska to be shown in a German institution. It was directly inspired by the architecture and interiors of the Museum Abteiberg, which were designed by Hans Hollein. Following her first visit to the Museum in March 2012, the artist conceived a series of simple interventions in its various spaces. Her interest thereby was sparked not so much by the museological concept but rather, by the architectural forms of the Museum, which are perfect in every detail, and by the meticulous design of its every last element. Przezwańska takes these details as a starting point and uses simple interventions to modify them – and thus creates highly individualised spaces, permeated wholly by nature.
At the core of Katarzyna Przezwańska’s artistic concern lie those exclusionary discourses dealing with the chromophobic impulse of the Western mind. On the one hand, colour is considered a characteristic of the other and connoted usually with that which is feminine, oriental, primitive, infantile or vulgar; and, on the other, it is dismissed as something superficial, superfluous and unimportant. The artist, whose own position is based on the use of colour, counters such discourse and its marginalisation of colour by positing that colour is one of the most immediate artistic means, the agent and foundation of all formal and thematic changes. Often, she makes use of local and contextual symbolism inspired by colour, uses the sensual and emotional impact of colour, or – on the contrary – uses colour as a mental construct, as an agent that is able to create order. Two other important starting points for Katarzyna Przezwańska are nature – its creative phenomena and distinct nuances – and the respective architectural environments in which she works.

Postmodern architecture, in contrasting the reductive and allegedly universally valid Modernist programme, offered not only formal diversity but also a consideration of context, of the history of the specific place. Yet its designs too were based still on Cartesian principles – on the regular grid so fundamental to Modernism. Katarzyna Przezwańska notes how exacting the rooms of the Museum Abteiberg are for art, and alters their repetitive and seemingly fixed structures. The entrance pavilion becomes a contemplative, inviting place on which nature has left its mark. Elsewhere, on the exhibition spaces’ garden level, the artist allows an outside wall covered in plants to penetrate the museum via a window, so to speak. One work series on show was created during the artist’s recent residency in Brazil. It does not refer directly to architecture of the Abteiberg Museum yet revolves nonetheless around the phenomena of design and architecture. Here, it is patently clear that nature inspires the artist in manifold ways. One recognizes in her short films or in a series of designs she made for the inhabitants of the Amazonian forest, those features of the local landscape that have also strongly influenced Brazilian architects and artists: the luxuriance and colourfulness of tropical climes.

Katarzyna Przezwańska (born 1984) lives and works in Warsaw. She studied painting at the Warsaw Academy of Fine Arts, under Jarosław Modzelewski. Her group exhibitions and projects to date include a series of interventions in Bródno Park, produced by the Warsaw Museum of Modern Art in 2010; ‘Fitting in Space’, Beirut 2010; ‘Beginning of an Exotic Journey’, Avant-Garde Institute, Warsaw 2009; ‘Sławek Pawszak feat. Kasia Przezwańska’, Galerie A, Warsaw 2009. She has also had two solo exhibitions: ‘Natural Selection’, Galerie Kolonie, Warsaw 2011; and ‘Wrzeciono 5 m. 145’, in her own apartment, 2009. The Fundação Armando Alvares Penteado (FAAP/ Foundation) in Sao Paulo, Brazil, granted the artist a studio scholarship/artist’s residency for 2012.

The exhibition is curated by Agnieszka Skolimowska and constitutes the final step in her one-year work placement at the Museum Abteiberg, which was organised in the framework of the Robert Bosch Scholarship for Cultural Managers from Central and Eastern Europe. The exhibition was realised with the generous support of the Robert Bosch Foundation the Institut für Auslandsbeziehungen (ifa) and the Adam Mickiewicz Institute in the frames of Klopsztanga Polen grenzenlos NRW Programme.
www.museum-abteiberg.de