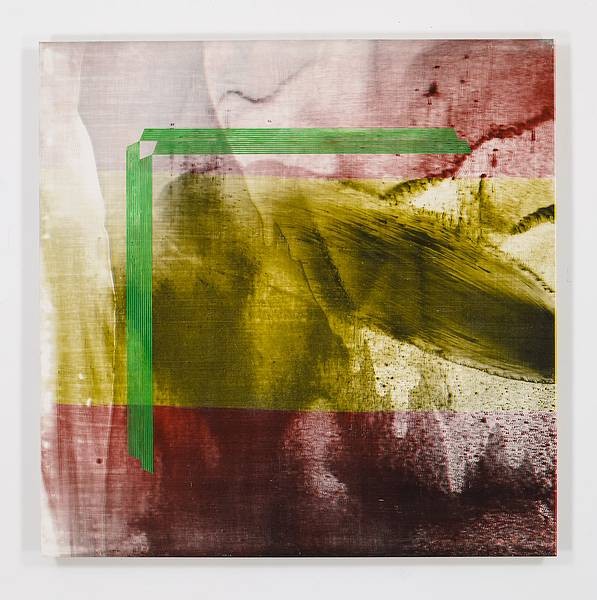 In 2001 R. H. Quaytman began applying a system with which to make all paintings into the future. One element of this system is to structure evolving groups of paintings as an author would a book - each exhibition in the artists resume is conceived as a new chapter added to and effecting the overall progression of what the paintings communicate. In addition to this advancing chapter structure there is a dimensional rule. The artist limits the painting’s possible dimensions to seven possible nesting ratios generated by the golden ratio 51 x 82.2cm inches. After several site visits Quaytman decided to compose this chapter using only the three square dimensions in the overall system: 82.2 x 82.2 cm, 51 x 51 cm, and 31.5 x 31.5 cm. Twenty versions or each square or sixty in total comprise ד, Chapter 24 for Museum Abteiberg opening on June 3rd.
A further element of Quaytman’s system is that all the paintings are made on plywood panels with bevelled edges. Each painting begins with a ground of rabbit skin gesso, sometimes in two colours. Photographic images or computer-generated patterns are then silkscreened onto these prepared surfaces. Almost every chapter includes one or two oil paintings which the artists calls Captions. The paintings are motivated by three primary concerns: the site, the installation, and the accumulating context of past chapters. The use of geometric patterns engage optical, chromatic and perspectival illusion. The motion and placement of the viewer in relation to the paintings is forgrounded in repeated motifs of trompe l’oeil edges and perspectival rotation. This particular chapter uses an Op image called the “L-effect,” which was originally meant to show the phenomenon of illusory movement in binocular vision.
ד, Chapter 24 employs a variety images directly related to Museum Abteiberg and Mönchengladbach. Many of the paintings are made from the museum’s image archive, and photographs taken by the artist of pieces in the permanent collection. These images are presented alongside several small portraits of their custodian, chief curator Hannelore Kersting. In addition Quaytman utilized in the gesso ground compositions various paper patterns provided by Van Laack headquarters in Mönchengladbach for collars and cuffs. The title ך is the Hebrew letter Dalet or D. It also symbolizes the number 4, which in turn is the number of the square.

A catalogue for Chapter 24 will be published as a boxed set of 60 cards depicting each painting accompanied by corresponding notes written by the artist about each image. A facsimile of Yve-Alain Bois’ early essay “The Tree and the Square” will be published along with its french 1977 original L’arbre et le carré and a new german translation. The box format is a direct reference to the affordable, unbound catalogues published by the Museum in Mönchengladbach under the direction of Johannes Cladders.
www.museum-abteiberg.de