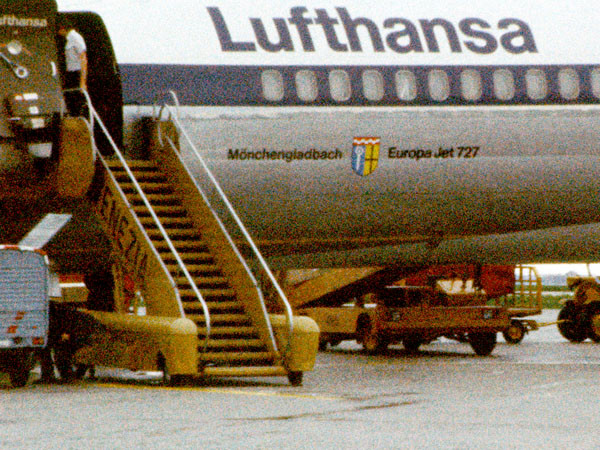 in cooperation with Museum Ludwig, Cologne, in parallel with its exhibition “Alibis. Sigmar Polke 1963 – 2010”

A satellite of the major retrospective on Sigmar Polke at the Museum Ludwig: Polke’s Biennale cycle of 6 synthetic-resin paintings in Mönchengladbach and the “making of” his German Pavilion at the 42nd Venice

Biennale in 1986. The Museum Abteiberg presents previously unseen films by Sigmar Polke shot between 1984 and 1986. In experimental, sketch-like, multiple exposures on 16 mm film, Polke filmed the pavilion, preparation, working processes, opening and the award ceremony in the summer of 1986, plus many motifs and fringe elements that combine to form a great pool of his inspiration. Unlike his films from the 1960s and 70s, Polke’s permanent cinematic vision and work in the 80s is largely unknown and now represents a newly discovered reference for his visual artwork.

In addition to the large-scale projection of these films, the exhibition presents several original objects and materials from the German pavilion, which won the Golden Lion in 1986. The Curator was Dierk Stemmler, the then Director of the Museum Abteiberg. The Mönchengladbach collection subsequently managed to acquire the large cycle of synthtic-resin paintings and two other large paintings, while Polke’s in-situ mural, a meteorite, a rock crystal and the overall interaction of his works in one space have been lost and forgotten.

Between March 15 and April 19, the final rehearsal of the exhibition OPEN DRESS will be presented with works by Nairy Baghramian, Lutz Bacher, Lukas Duwenhögger and Danh Vo.

To mark the opening of this final scene, Nairy Baghramian has invited the art and film historian Manfred Hermes to present a lecture linking the two parallel exhibitions at the Museum Abteiberg, thereby establishing a connection between the films of Sigmar Polke and OPEN DRESS.
www.museum-abteiberg.de