Von Da An (From Then On) 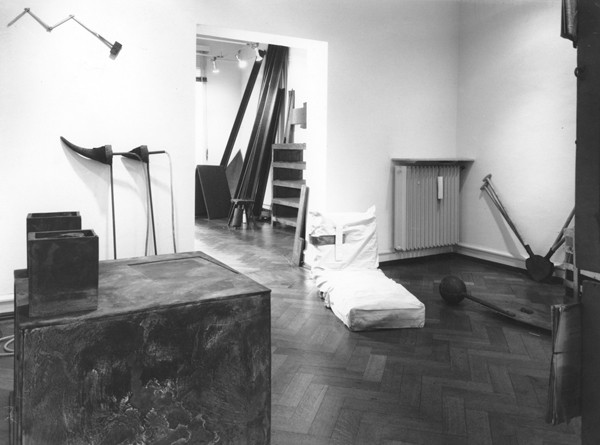 Exhibition Joseph Beuys, 1967, Photo: Ruth Kaiser
VON DA AN (FROM THEN ON)
Temporary re-opening of the Städtisches Museum in Mönchengladbach
SPACES, WORKS, VISUALIZATIONS FROM THE ANTI-MUSEUM 1967 – 1978
Exhibition project at Museum Abteiberg and the historical Städtisches Museum, Bismarckstraße 97
13 September 2017 - 18 February 2018

September 13, 1967 saw the start of a legendary program at the Städtisches Museum in Mönchengladbach. New director Johannes Cladders assumed his post with the first major exhibition by Joseph Beuys. It was a show of objects that seemed more like inexplicable relics than art: things, found objects on the floor, leaning against walls or stacked in glass cases. The museum looked like a cultural-historical storage space. Cladders and Beuys called it an anthropological space. The years that followed brought new concepts of art to the old museum rooms in Mönchengladbach. The program centered around completely altered ideas about what art could be, showing, among other things, Carl Andre’s first exhibition at an institution (1968), photos series by Bernd and Hilla Becher (1968), spatial concepts by artists including Hanne Darboven, George Brecht, Robert Filliou (1969), Stanley Brouwn, Hans Hollein (“Hans Hollein: Everything is Architecture, an Exhibition about Death,” 1970), Marcel Broodthaers (“Film as Object. Object as Film,” 1971), Daniel Buren (1971, 1974), Blinky Palermo, Lawrence Weiner (1973), Gerhard Richter (1974) and John Cage (1978) – artists now considered some of the most important protagonists of recent art history. 50 years later, Museum Abteiberg wants to realize an exhibition purposely held in the historical venue, with a focus on the history that transpired there between the years of 1967 and 1978.

The plan foresees a concept recalling the original exhibition space. The goal is to introduce the contemporary public – which so often complains about the radicalities of today's art – to the utterly radical, institution-critical ideas of bygone times: the phenomenological and Structuralist turn in visual art and its perception in the 1960s and 1970s, but also the vision for a new museum identity that came out of it. In 1968, Cladders termed this turn the “anti-museum,” based on a concept by Willem Sandberg. The program at that time had a powerful influence on the architectural concept for Museum Abteiberg (Hans Hollein, starting 1972).
The old spaces will feature works by artists active at that time, with documentaries and reconstructions of early presentations. The degree to which these exhibition scenarios and atmospheres can be reconstructed is an experiment. Different levels of the presentation have been combined as the result of conservation restrictions and occasional works that are no longer available. The rooms themselves are key to the visualization, and reproduction media are used in conjunction with original objects. The concept is being realized in cooperation with curator Susanne Rennert and artist Olivier Foulon, in dialogue with some of the artists from time, as well as artists from the present day whose presentation ideas establish a relationship between the two times.The empty, original rooms of the Altes Museum in Mönchengladbach are a singular space for engaging with the past, present and future of the museum as an institution. Neither Museum Abteiberg, nor any other contemporary museum would be able to give a sense of these 20th century as they were experienced back then. The experiment comes at the right time, as recent international scholarship has taken a keen interest in the history of today’s museum landscape. The project in Mönchengladbach represents a collision of historical museum spaces and visionary museum concepts, supplemented with a publication overseen by Susanne Rennert – a long-time desideratum of research supported by the Rhineland Regional Council. The project as a whole is funded by the German Federal Cultural Foundation.
www.museum-abteiberg.de