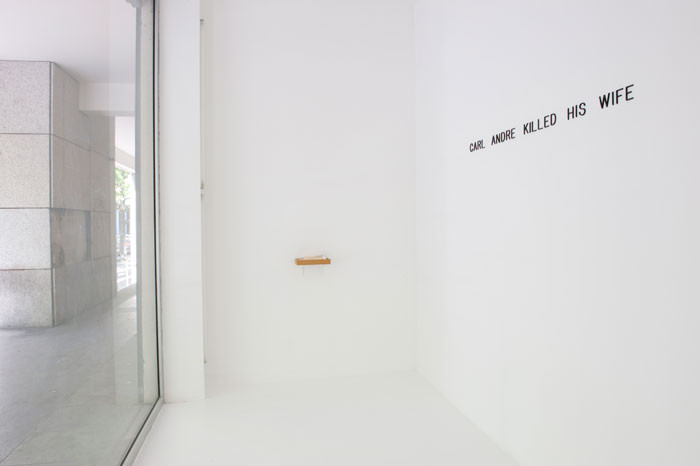 Ben Kinmont (Born 1963 Burlington, Vermont, USA) is interested in interpersonal communication as a means of addressing the problems of contemporary society. His sculptures and actions attempt to establish a direct, personal relationship between the artist and the viewer, using the work as a mediator.

Simultaneously to his exhibition “Prospectus Paris” (Kadist, 2 avril–1er mai), he shows his seminal work “Carl Andre killed his wife” at Air de Paris, that he describes :

They were both abusive to themselves , and he had spent so much time talking about accessible work. And, then, there was the issue of the family, as artists and if it was possible. Olivier Mosset first bought this piece ; but then, when Carl Andre gave money to Julian Pretto to help him during the last months of his life, Olivier wanted to trade the piece. He had also become friends with Carl in the meantime. I, too, was interested in how the piece meant to me now, having heard about Carl’s support of Julian. So the piece grew into new questions.

1988. plastic letters on a wall.
1995. notes added concerning pieces return and trade.
Project can not be repeated.
In 1988 Carl Andre was acquitted.