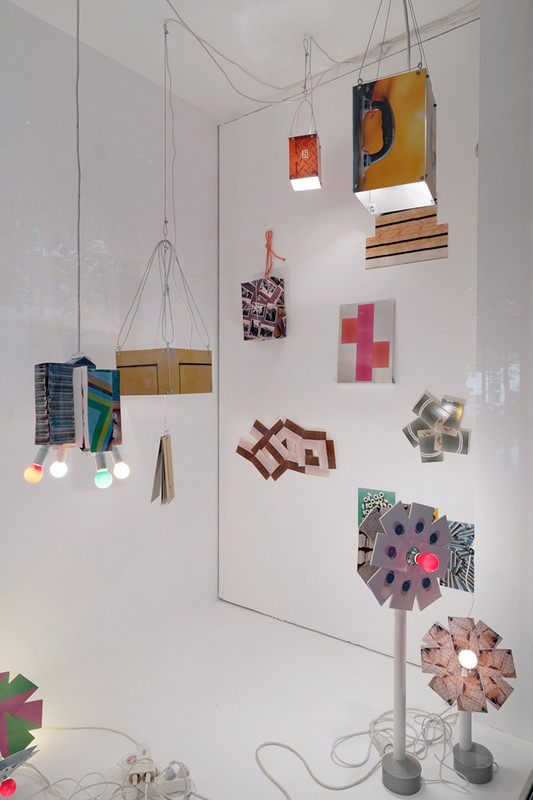 Jack Jaeger began making art works as he approached fifty. A still photographer since the 1950s, he’d already abandoned a career shooting, editing, and directing TV commercials and feature films, when, in the mid-1980s, he started to make quirky, bricolage sculptures using his own brightly colored snapshots. These photographs – which he had commercially printed in multiple copies at neighborhood photo-shops – were mostly close-ups of everyday objects or seemingly abstract shots of colored papers. Attached to one another with nuts, bolts, and wire, Jaeger’s snapshots became the building blocks for a considerable armada of domestic-scaled assemblages whose grammar invariably weds the illusionism of photography to the facticity of sculpture, in a tradition that extends from Man Ray to Robert Heinecken to Sara VanDerBeek. Jaeger’s constructions – his pieces are wall-mounted, free-standing or suspended from the ceiling like mobiles – often refer to the hardware and real-life objects that were used in their making, but they are never mere art-about-art. That became abundantly clear in his final decade when Jaeger’s sculptures became also lamps, illuminating not just themselves and the nature of photography but the world around them – and us. Steel Stillman

Jack Jaeger (1937–2013) is an artist, curator, and editor. Between 1994–96, Jaeger edited the eight issues of ZAPP Magazine, a pioneering video art magazine. He also curated numerous shows, including “Please, don’t hurt me!” 1993, at Gallery Snoei in Rotterdam and Cabinet Gallery in London, which was responsible for introducing Carsten Höller, Roman Signer, Elke Krystufek, and Lily van der Stokker to British art viewers. White Columns featured Jaeger’s work in a solo show in 2005.
www.airdeparis.com