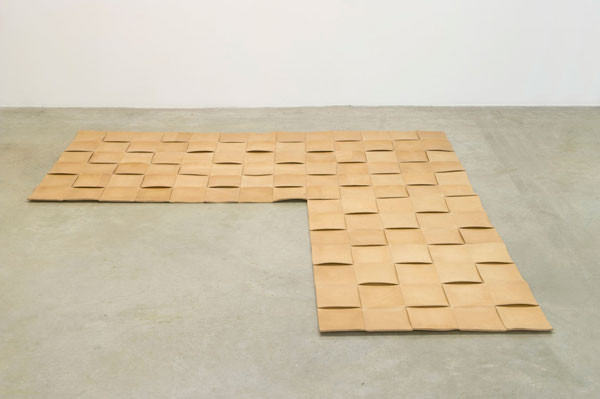 Antunes is presenting a series of new sculptures based on the measurements of specific Modernist buildings. Works that are reversals of reversals: nothing less than taking the anti-Modernist gambit identified by Rosalind Krauss in her "Notes on the Index" (1977) – use of a referent external to the work, in contrast with Modernism's purist rationale – and applying it to referents in the form of iconic, overtly Modernist works of architecture. Just as the artist did with the work of designer Eileen Gray in her Paris exhibition at Crédac in 2008.
The measurements for these new sculptures were taken in unrenovated apartments in the Vila de Flavio de Carvalho in São Paulo – a group of sixteen units built in 1936–38 – and in an identically restored apartment designed by Robert Mallet-Stevens in 1927 in the Paris street now named after him. The results are sculptures made of brass, copper, rope, leather and wood, which are part of a subtle yet clear form of protest against a certain ideal of purity and disembodiment.

Portuguese artist Leonor Antunes lives and works in Berlin. Her numerous recent museum exhibitions include the Kunstverein Dusseldorf, the Museo Experimental El Eco in Mexico City, the Museu de Serralves in Porto, the Museo Nacional Reina Sofia in Madrid last year, and Crédac in Ivry-sur-Seine in 2008. She has also contributed to many group exhibitions at the Chicago Museum of Contemporary Art, the Singapore Art Museum, Kunstverein München and elsewhere.
Her work is now to be found in many leading collections, including the Musée d’Art Moderne de la Ville de Paris; the Daimler Chrysler Collection in Berlin; the Caixa Geral de Depósitos and the Fundação Calouste Gulbenkian in Lisbon; and the Museo Nacional Reina Sofia in Madrid.
www.airdeparis.com