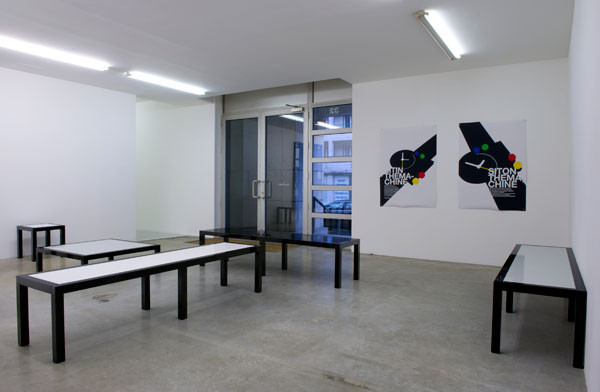 Liam Gillick’s exhibition at Air de Paris comprises two new films and a series of new structures. The first film is derived from a filmed tour, in idealised form, of the Kalmar Volvo factory, shot in the early 1970s. The second film is developed from a short clip of a group of car workers sitting inside a metal machine press, having to bend over each time the press bears down on the metal forms they repetitively place into the mechanism. In contrast to the idealised vision presented in the Volvo film, the car workers in this case have literally become part of the mechanism of production.
Adjacent to the two films is a “relaxation area”, modelled after the rest areas that were provided for each team at the Kalmar plant. Posters for the two films and the artists ongoing draft text of the book Construction of One, now 45,000 words long, will be located in this area.

Throughout the artwork over the last twenty years, the question of doubling, parallels and apparently unresolvable relationships has been a structural tool deployed as a fractured mirror of questions around production rather than consumption.

“You can see that in my work that there's a constant dualism, which is between the desire to retain a ghost of a broken structure – to maintain some kind of semi–autonomous art object that can be differentiated from everything else by its “art” quality, and at the same time, to use many of the things that we’ve used, like research, project-based structures and stepping out into documentary methodology to think about questions of production in the broader context.” Interview with Hans Ulrich Obrist, 2011

Liam Gillick is an artist based in London and New York. Solo exhibitions include The Wood Way, Whitechapel Gallery, London, 2002; A short text on the possibility of creating an economy of equivalence, Palais de Tokyo, 2005 and the retrospective project Three Perspectives and a short scenario, Witte de With, Rotterdam, Kunsthalle Zurich, Kunstverein, München and the MCA, Chicago, 2008-2010. He was nominated for the Turner Prize in 2002 and the Vincent Award at the Stedelijk Museum in Amsterdam in 2008. Many public commissions and projects include the Home Office in London (2005) and the Dynamica Building in Guadalajara, Mexico (2009). In 2006 he was a central figure in the free art school project unitednationsplaza in Berlin that travelled to Mexico City and New York. Liam Gillick has published a number of texts that function in parallel to his artwork. Proxemics (Selected writing 1988-2006) JRP-Ringier was published in 2007 alongside the monograph Factories in the Snow by Lilian Haberer, JRP-Ringier. A critical reader titled Meaning Liam Gillick, was published by MIT Press (2009). An anthology of his artistic writing titled Allbooks was also published by Book Works, London (2009). In addition he has contributed to many art magazines and journals including Parkett, Frieze, Art Monthly, October and Art Forum. Liam Gillick was selected to represent Germany for the 53rd Venice Biennale in 2009. A major exhibition of his work opened at the Kunst und Ausstellungshalle der Bundesrepublik Deutschland in April 2010. He has taught at Columbia University in New York since 1997 and the Centre for Curatorial Studies at Bard College since 2008. Public collections include: Government Art Collection, UK; Arts Council, UK; Tate, London; Museum of Modern Art, New York; Guggenheim Museum, New York; Hirshhorn Museum, Washington DC; Museum of Contemporary Art, Chicago.
www.airdeparis.com