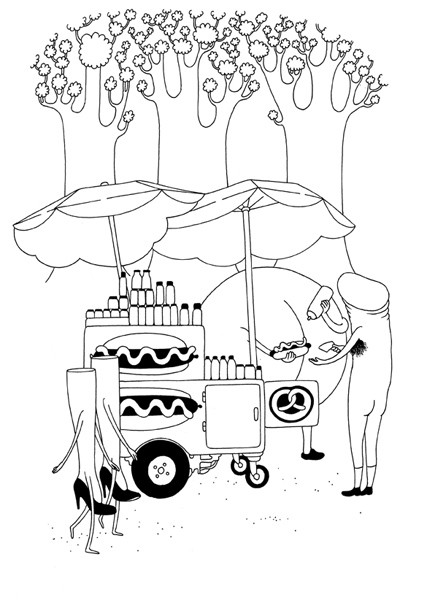 The exhibition PAGINATIONS & MACHINATIONS presents works whose form is ahair's breadth short of that of the book. Destined to be brought together – like these pages – they relate an encounter (Dorothy Iannone), which maybe happens in the Air de Paris space (Mrzyk & Moriceau) or when the visitor is invited to trigger things there (Allen Ruppersberg). So different strategies – of assemblage, binding, reproduction and printing – are summoned up by these forms of existence of the page. Forms which, far from being static, are variable, like Joseph Grigely conversations (pigment prints, book, sticker). The work on show here by Aaron Flint Jamison reminds us of the origin or the mechanically printed destiny of the others in the show: of pages and machines, of intersecting stories, brought together by physical acts even as they themselves relate acts of separation and reunion, of disappointment and happiness, of connections that are disconnected then reconnected and reread.

Dorothy IANNONE
An Icelandic Saga (1978, 1983, 1986) relates the encounter between Dorothy Iannone and Dieter Roth. In 48 unpublished plates that mingle her handwriting and her images, the artist recalls the crucial meeting and her deeply intimate perceptions of it. Her acute consciousness of what was taking place blends with hindsight to form a narrative – of the beginning of their seven years together – whose intensity gives it the mythological sweep of a Norse saga.

Aaron Flint JAMISON
The book is at the heart of Aaron Flint Jamison's oeuvre. The Helicopter and the Halfpipe combines fragile books printed on carbon paper and films the artist has made by placing his camera on the presses printing them. The recurrent movement of the camera references the form it is recording: the artist has typographically composed a circle using repetition of the word 'Red', which in turn references a make of highdefinition camera.

MRZYK & MORICEAU
Passion, suspense, love, art, sex – and a stopover at Air de Paris for a great graphic novel that freshens up all the genres and is going to keep people talking for a long time. A chance to inspect the original plates of Mrzyk & Moriceau's book Q – part of publishers Requins Marteaux's sexy series (in French Q = cul = sex) – right here on the gallery walls, and to be part of that first burst of energy.

Allen RUPPERSBERG
Here in the gallery the visitor has the chance to compose not just a poem, but also its own book, by selecting 5 pages out of 22 piles. Free Poetry (2005) is not only a liberation of the book form, it's also an ongoing recreation of text content. The book never stops, because it's never stopped beginning: paginations and machinations, machination in the pagination.
www.airdeparis.com