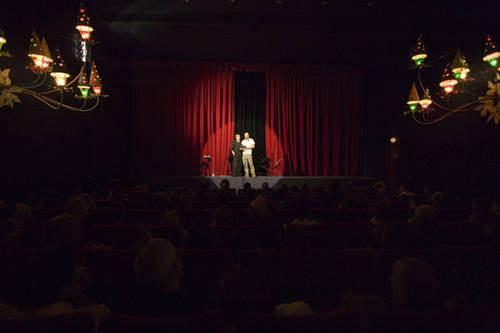 PHILIPPE PARRENO
"The Ultrasonic Screem of the Squirrel"

Air de Paris is pleased to be presenting a solo exhibition by Philippe Parreno that includes the photographs of his performance with a ventriloquist, luminous labels and the Stories are Propaganda installation created with Rirkrit Tiravanija. These works index a language close to that of dreams, together with forms drawn from world of entertainment and its magic. On 18 September last, in place of an exhibition at Air de Paris, you may have been present at Parreno's The ultrasonic scream of the squirrel. For an hour Studio 28, with its Jean Cocteau décor, was host to Parreno's "exhibition" with ventriloquist Ronn Lucas. After showing his skills, Lucas questioned the artist about what had brought them together. The exchange led to a "retroprojective" sequence for which Parreno chose to read two of his texts, The Underground Man and Alien Seasons. The performers' voices mingled disturbingly as the performance provided a staging of their meeting and, notably, of the form a joint work takes in raising the question "who's speaking?" This event was conceived as a studio situation, an experiment out of which something would ultimately emerge. Parreno opted for still photography as the best way of distancing an event by pointing up the silence, the audience and the staging. In the room on the left a flashing label showed the two performers in close-up as they read The Underground Man, while the text appeared on another label. The reading of the image and the reading of the text are subjected to different light rhythms that stimulate the memory process and give the viewer the chance to project his own stories into the work. Already shown at the Lyon Biennale in 2005, Stories are Propaganda is a film made with Rirkrit Tiravanija. It was shot in Guangzhou, China's most urbanised area, and its images conveying their wanderings and their thoughts sets the film's strangely melancholic tone. "This is a journey through an infinite urban landscape. A series of banners setting up fragments of a parallel world, a feeling of suburbia. [...] Information's that glows before fading away." As in Fade to Black, the reading time is limited, each image being quickly replaced by the following one. The film is made up of stills - a TV show, an albino rabbit, a snowman made of sand... - and the sound is the voice of a child recalling the good old days, "Before cappuccino and sushi and ruccola went global / When every second person was not a hero / Before music became our soundtrack..." In the installation the dated codes of the cinema - a manually operated red velvet curtain - are immediately contradicted by the title, a graffito sprayed directly onto the curtain. At the end of the film the curtain is drawn and the viewer can leave with a head full of images, stories and memories.