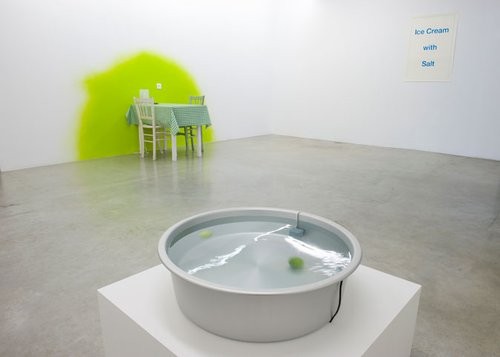 Pierre Joseph, a seminal figure for the new generation of French artists, is pursuing his questioning of tangible signs of reality. His approach successively deals with issues like the permanence of things and the transposability and digital manipulation of reality.
«The exhibition», says Pierre Joseph, «is made up of notes and ideas given concrete expression. These ideas take on a certain form right now, but this material form could be different. The forms adopted are not necessarily the most appropriate ones, but they are the product of various choices randomly made at given times.
«Two of these forms are kinds of mirages, glimpses of a reality that might or might not be there, like memories. A third one – a shelf – inventories various common materials and counts out their degree of biodegradability from ephemeral to everlasting. The fourth form is a digital picture frame showing a text by Jean Baudrillard about disappearance, followed by a critical analysis of the shift from analogue to digital, especially in the field of photography.
«It is about conservation and memory, time and technology.»

Born in 1965, Pierre Joseph lives and works in Paris. His works have been acquired by many private and public collections both in France and abroad. Recently they have been presented at the Conciergerie in Paris as part of the Centre Pompidou’s New Festival, the Printemps de Septembre in Toulouse, the MOCA in Miami, the first Athens Biennial and the Lyon Biennial.

Following the example of ultimately cutting-edge Japanese cuisine – more concerned with difference and variation in savour and texture than with taste sensation – Shimabuku homes in closely on the everyday objects, searching for differences between identical products, or what different objects have in common. This poetic observation of nature becomes an opportunity for life lessons, for the challenging of one’s criteria regarding taste and choice, for reconsideration of rushed judgements. Reminiscent of Robert Filliou’s «bricolage» («...do something else...»), Shimabuku raises questions relating to timeless folk wisdom or even zen philosophy – explicitly formulating issues like “How do you accept something you don’t understand?» and «Doing something you didn’t plan to do». His artworks generate images as humorous as fulgurant..

Born in 1969 in Kobe, Japan and now living and working in Berlin, Shimabuku recently had a solo exhibition in The Watari Museum of Contemporary Art in Tokyo and showed at the Sao Paulo Biennial. He has also exhibited at Berlin's Neue Nationalgalerie and DAAD galerie, the Whitechapel Art Gallery in London and the 21st Century Museum of Contemporary Art in Kanazawa.
www.airdeparis.com