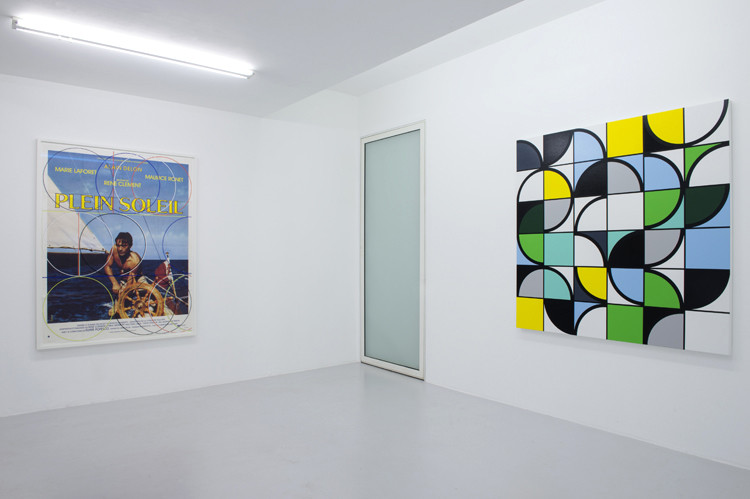 Air de Paris is pleased to be presenting Once a Thief, Sarah Morris's fourth solo exhibition.

The exhibition includes the French première of her film Rio, together with a series of Rio-themed paintings being shown for the first time and new gouaches on film posters. In her paintings, drawings and films this American-British artists offers a subtle analysis of urban, social and bureaucratic typologies: Rio, for example, explores various places and events in the city, among them the office of the architect Oscar Niemeyer shortly before he died; the headquarters of Eduardo Paes, Rio's current mayor; the organising of the carnival with its famous parade of floats; the Cidade de Deus ('City of God') neighbourhood; and the Brahma brewery. A new portrait coming in the wake of Chicago, Beijing, Los Angeles, Miami and others, this eleventh film does more than just highlight Rio's architecture: the main character is actually the city itself, and the emphasis is on its social and political organisation at a time when Brazil is striving to open up to the outside world.

Space and the way it is structured are omnipresent aspects of Sarah Morris's work, and her paintings are no exception: in addition to portraying the places that are their subjects, they reconfigure them spatially. The canvases making up the Rio series include diagrams and dynamic abstract compositions – schemas, the artist calls them – that unpack Rio's inherent contradictions and are notably inspired by the multifaceted work of Roberto Burle Marx and Lina Bo Bardi, the cycles of the moon and even the sleeves of Bossa Nova albums. And while we can't help seeing an allusion to the generous curves of Niemeyer's architecture in the rounded shapes featuring in Morris's paintings here, the series also makes no secret of its debt to the Sambódromo Carnival, Rio's host of juice bars, the chaises longues and parasols on the beaches and such iconic consumer items as Brahma, the locals' favourite beer.

A series of gouaches on film posters rounds off the new exhibition, underscoring the international seriality of movie distribution in different countries in a way that associates the directors, production and reception with what Sarah Morris sees as open-ended narratives. Intensified by the artist's coded compositions, Once a Thief, The Swimming Pool, F for Fake and other works highlight not only the seductive propaganda systems at work in the cultural – and especially cinematic – domain, but also shooting locations.

Commissioned by the Louis Vuitton Foundation, Morris's new film Strange Magic is currently being shown at the Foundation's inaugural exhibition in Paris. And Patrick Javault will be talking to Sarah Morris as part of the art interviews series at the Fondation d’Entreprise Ricard on November 12, 2014, at 7 pm.