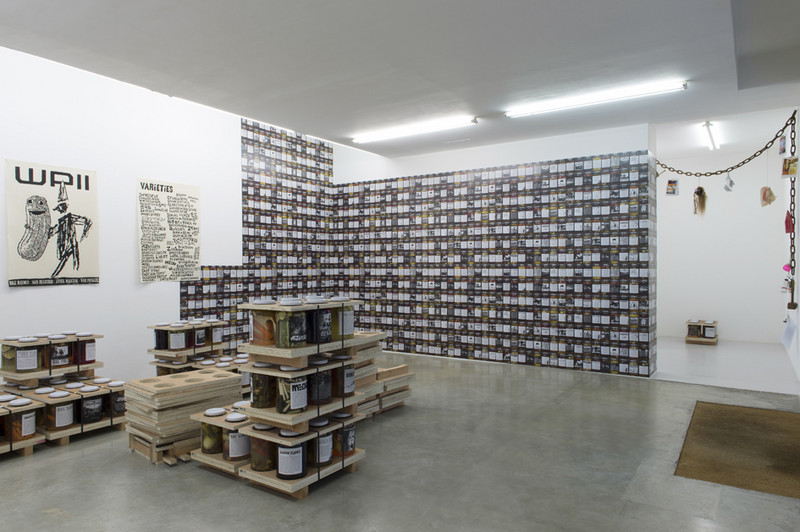 War Pickles II is a fun exhibition full of pickles and war that anyone will surely understand and enjoy freely, without years of advanced education or careful definition of taste. As art, it smacks the palette and hits you in the gut, culminating in a fine relieving burp.

Let us begin by testing the waters of the psychic imbalance between the market and the economy, terms implanted in the mind oppositionally, yet functioning according to the most sublte laws of sneaky dialectics. The market is an actual place, a site of dirty work, where we roll up our sleeves and do human business, like our daily rhythmic trips to the commode, but in public with social graces. We are constantly on guard about how to appear or admit our attendance at the market because it is the unforgiving materialistic demon of the everyday. It’s not only up in your face but contorting it lastingly - wrinkles, creases, frowns, the rigid smiles greeting customers in pharmacies and bakeries. Money is the pure symbol covering up all that toil. Ah but the economy is ethereal, encompassing system-wide whims too intricate for mortals to fathom. It’s enough to say that the economy either smiles or frowns upon the earth with its scales of cosmic balance. As a faith it spreads its word and promises–enabled by a hunchbacked servant named market–with an ideology strong enough to conquer and govern, extending in every domain. Among others, there are aesthetic economies, sexual ones, economies of physical motion, and even those for madness. Thus we might say that economy is the most perverse folly of metaphysics, an exterminating angel born from the ashes of a resentful dead god.

Any materialism without the subjective element is clearly bonkers. Materials vs materialism. War Pickles cannot go overboard about foregrounding the material of art as expression or concept because pickles are all about the ingredients. The concept is less about lines to blur than trenches to leap over while charging the enemy. What does a jar of pickles have to say today? What did it say before? Can it say more when it sits in an art gallery than it can by singing in a Broadway musical? War pickles doesn’t understand the question here.

To conflate materials and ingredients is bonkers. Not satisfied to passively observe and represent or reflect the givens of the everyday (technology, biorobotic fleshiness, the organic and modified), War Pickles II acutally wants to touch the merchandise, lend it feeling and affects (if possible), to make things/objects cry, blush, laugh, and worry about the future.
www.airdeparis.com