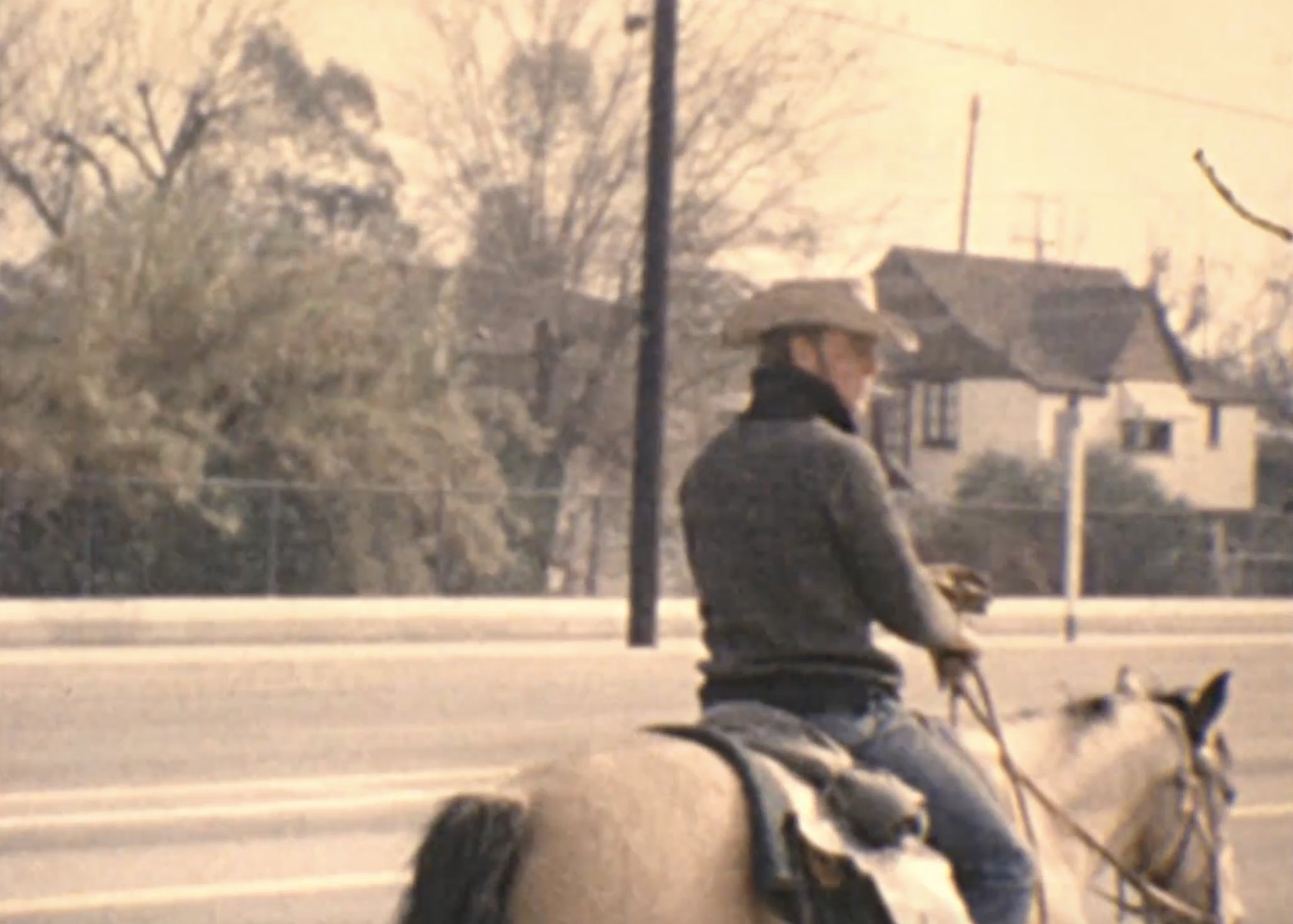 “ I particularly recall a performance, I think on the top floor of a loft witnessed by a pretty good crowd, where he stood naked in front of us with eyes closed and tried and failed to get an erection. Such a bad idea and so good.”

Wolfgang Stoerchle is a somewhat concealed artistic figure of the early 70s who left a certain but little advertised mark on a generation of Californian artists, especially through videotapes and performances involving his body as raw material.

Born in 1944 in Baden Baden (Germany), Wolfgang moved to Canada with his family in 1959. Three years later, in 1962, Wolfgang (then 17) left Toronto with his brother on a horse, travelling in the saddle for 11 months across the breadth of the United States to finally arrive to Los Angeles. Wolfgang would eventually claim this journey as his first artwork.

After three years of studies at the University of Oklahoma, followed by two years of Masters at UCSB, Wolfgang became one of the inaugural teachers at CalArts (where his students included James Welling, Matt Mullican, David Salle & Eric Fischl). This very productive time in Wolfgang’s work saw him adopt the Portapak camera and turn to video. Working also in performance, he presented iconic works live in front of an audience – such as trying to get an erection (performed in Robert Irwin’s studio in 1972) or attempting to have oral sex with a man (presented in the studio of John Baldessari in 1975).

Playing with rudimentary but fundamental actions to interrogate changing forms of state and status, using his own body as an expressive instrument, Wolfgang made a significant mark on the LA art scene of the time. Often working with notions of discomfort and vulnerability, in a blurry space between sincerity and humour, his works would often not ‘work’ – but would find their effectiveness through this very fact. In a rehearsal video for one of his pieces, he describes one such performance as a “success in failure”. It’s worth thinking about that.

After relocation to New York in 1973 he eventually grew disaffected with the art world. He spent two years on numerous journeys and retreats – studying his dreams and living as an ascetic in the Mexican mountains – before eventually settling in Santa Fe, where he slowly returned to making art. As Paul McCarthy has said of Wolfgang, ‘I think he was on some sort of journey of affecting his own being’. His life and work are difficult to separate.

A selection of video works and some fictional news items, on show at Air de Paris, will offer an introduction to Stoerchle’s work, from its early beginnings to his prolific but brief output in LA, as part of an ongoing re-evaluation of his practice and its legacy.

Alice Dusapin started her research on Wolfgang Stoerhcle in 2016 and is currently working on a monograph to be published late this year by Christophe Daviet-Thery including interviews with Matt Mullican, Paul McCarthy, David Salle, Helene Winer, Daniel Lentz and Peter Stoerchle.
www.airdeparis.com