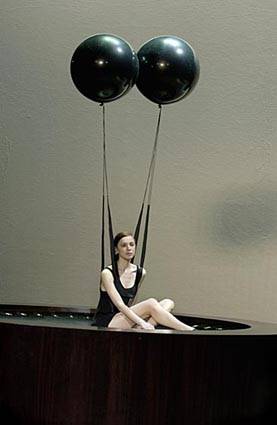 GALERIE AKINCI
is proud to present the first gallery exhibition in the Netherlands of the work of Turkish Cypriot artist and fashion designer Hussein Chalayan. This year, Chalayan had his first big solo exhibition at the Groninger Museum and represented Turkey at the Venice Biennial.

Hussein Chalayan is one of the most innovative, experimental and conceptual fashion designers of the present day. Born in 1970 in the Turkish sector of Cyprus, he grew up in London. In his collections, he incorporates such themes as cultural identity, origins, migration and travel. In addition to his personal history, such disciplines as architecture, philosophy and anthropology inspire him to create his collections. His fashion shows are performances in their own right. Especially impressive among these was his show Afterwords (autumn/winter 2000/2001), in which a living room is transformed into clothing and the chairs are carried off as suitcases.

In recent years, Chalayan has also made a number of films. These are a logical progression from his theatrical fashion shows, in which his collections form part of the performance. In his films, the themes that he puts into his fashion designs are translated to a different and more spacious plane, but the search for (cultural) identity remains an important element. His best known film is Place to Passage, which involves a journey in a high-tech space shuttle from London to an imaginary Istanbul. The film was shown this year at the Central Museum of Utrecht and the Groninger Museum.

Galerie Akinci will be showing two of Chalayan’s recent films, Anaesthetics (2004) and The Absent Presence (2005). A number of objects from The Absent Presence, two photographic collections and a T-shirt designed by him will also be exhibited.

The film Anaesthetics concerns the transformation from violence to ritual and aesthetic imagery in various societies. In The Absent Presence, research is carried out on traces of human DNA in clothing in order to receive information about types of people and their reaction to their environment. The Absent Presence, a 5-channel video presentation, will also be shown until 12 November in the Turkish pavilion at the Venice Biennial.

The solo exhibition of Hussein Chalayan which took place at the Groninger Museum will be travelling to Kunstmuseum Wolfsburg (15 October 2005 - 5 February 2006).