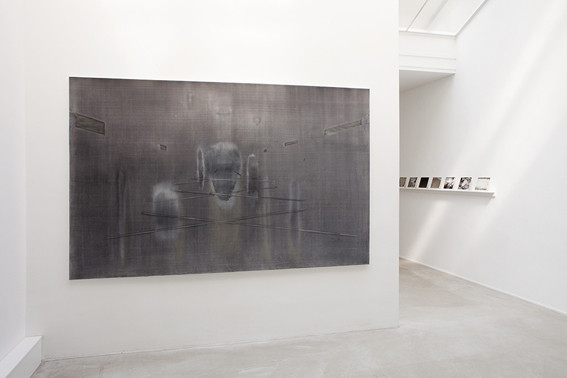 Exhibition view
JĀNIS AVOTIŅŠ & ADRIÁN MELIS
Everything Was Forever, Until It Was No more
14 March - 18 April, 2015

AKINCI is proud to bring together Adrián Melis (Havanna, 1985) and Jānis Avotiņš (Riga, 1981) who both contemplate upon the Communist system in their work, albeit from different view‐ points. In the case of Adrián Melis the system is a part of every day life in Cuba, whereas in the life of Jānis Avotiņš it exists as a faint memory from childhood before the collapse of the USSR. The title of this exhibition, Everything Was Forever, Until It Was No More refers to a book written by the Russian writer Alexei Yurchak. Yurchak explores the paradoxes of the Soviet life during the period of 'late socialism', between 1960 and 1980, through the eyes of the last Soviet generation.

Adrián Melis, who debuted in 2013 internationally at the Kunsthalle Basel with his show 'The Va‐ lue of Absence' and is now in his second year at the Rijksakademie Amsterdam, investigates a.o. paradox situations of the Communist system in Cuba. The general lack of productivity in Cuban state‐run enterprises is the starting point of the works presented by Melis at AKINCI. In the con‐ text of his projects he replaces the absence of labour productivity with (subversive) artistic creativity.

In the work 'The Value of Absence' (2013), shown at AKINCI, Melis records the creative mental process involved in making excuses to avoid work. Taking advantage of workers' lack of motivati‐ on, Melis got in contact with numerous workers who would get paid for not going to work. The artist’s aim was to compile as many excuses as possible by purchasing the rights to record the telephone conversations. This way, Melis generated a community of people whom he paid the same amount of money that the State would have paid for their labour.

Moments that shaped the world I, II, III is a trilogy of video works where the juxtaposition of ima‐ ges and sound modifies one’s perception and suggests new meanings. In Moments that shaped the world I ‐ Havana‐Berlin juxtaposes the long shot of a present street in Havana and the audio archive from the CNN live broadcast of the fall of the Berlin wall in 1989. This simple disjunction between image and sound suggests the persistence of an ideological system which already fell apart in certain parts of the world, yet still conditions life in Cuba.

Born in 1985 in Havana (Cuba), Adrián Melis studied at the San Alejandro Fine Arts Academy (2000‐04), High Institute of Art (2005‐10) and the Cátedra de Arte Conducta (2007‐09) in Havana. He is currently artist in residence at the Rijksakademie van Beeldende Kunsten in Amsterdam. Me‐ lis has had solo exhibitions at the Kunsthalle Basel (2013), Museum of Modern Art, Santander (2012) and Adn Galería, Barcelona (2012‐13). His work has been presented in group shows throughout Europe and the USA, a.o. the MoMA—Museum of Modern Art in New York (2014), the Future Generation Art Prize at Pinchuk Art Centre in Kiev (2014), Loop Festival in Barcelona (2014), the Neue Galerie in Innsbruck (2014), The Museum of Modern Art in Warsaw (2013) and repeatedly in his birth town during the Bienal de la Habana. Melis has been awarded with the Art Nou Prize (2013) for best exhibition (Adn Galería: Time to Relax), Barcelona, and the Bueno, Boni‐ to y Barato Prize (2006) for curatorship, received by the Agencia Española de Cooperación Internacional, Havana. He lives and works in Barcelona and Amsterdam

The paintings of Jānis Avotiņš breathe the atmosphere of an eternal and bleak world where every action seems to be frozen in eternity. They are like dreamscapes, functioning as cropped memo‐ ries, inspired by portraits from old newspapers, documentary photos, and screenshots from So‐ viet films. In particular photographs of conferences triggered Avotiņš' attention, devoid of any context the participants seem anonymous and therefore replaceable . After going through count‐ less archives, Avotiņš had to conclude that, although, these endless amounts of photographs we‐ re meant to function as manifestations of ideology, the images were viusually almost identical, the camera positions, the headlines, the gestures etc, seemed always the same, no matter if they were taken in 1964, 1965, 1966 or 1967.

Alexei Yurchak explains in his book that Soviet socialism was based on paradoxes that were reve‐ aled by the peculiar experience of its collapse. To the people who lived in that system the collap‐ se seemed both completely unexpected and at the same time completely unsurprising. At the moment of collapse it suddenly became obvious that Soviet life had always seemed simultane‐ ously eternal and stagnating, vigorous and ailing, bleak and full of promise. Avotiņš' paintings are like flashbacks from a collective memory. However, according to Avotiņš the collective memory is actually the 'collective denial' of a whole generation who, as in his case, have never experienced the Communist system, but rather have banned it out of their lives without ever taking part in it

Jānis Avotiņš, born in 1981 in Riga (Latvia), graduated from the Janis Rozentals School of Fine Art (1999). He pursued his studies at the Manchester University (2002) and received a BA Painting at the Latvian Academy of Art (2003). Avotiņš’ work has been presented in exhibitions throughout Europe and the USA, a.o. the Saatchi Gallery, London (2012), Hudson Valley Centre for Contempo‐ rary Art, New York (2006/07/10), Ludwig Forum für Internationale Kunst, Aachen (2008), Villa Manin Centro d’Arte Contemporanea, Codroipo/Udine (2006) and the Prague Biennale (2005/07). He has had solo exhibitions at Galerie Rüdiger Schöttle (Munich), Vera Munro (Hamburg), AKINCI (Amsterdam), and is represented by IBID Projects in London and the Johnen Galerie in Berlin. His works are in various collections, a.o. the Saatchi Collection in London and The Cartin Collection in Boston. Avotiņš lives and works in Riga.
www.akinci.nl