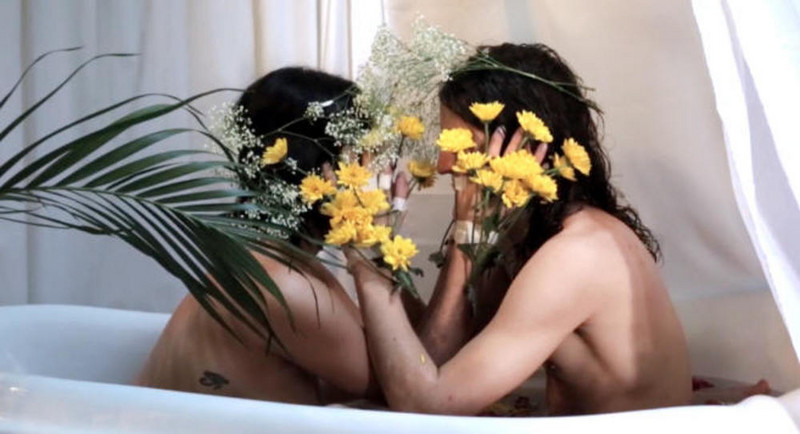 AKINCI is proud to announce Melanie Bonajo's first solo show, Night Soil / Economy of Love, with a lush and sensuous opening on Saturday 12th of September 5 - 7 pm, followed by a psychedelic concert by Bonajo's music duo Z▲Z▲Z◎Z◎ in OT301 8 pm.

This festive opening will be accompanied by the presentation of Melanie Bonajo's newest book, 'Matrix Botanica, numero 1 - Non-Human Persons,' designed by Experimental Jetset and published by Capricious Publishing, New York.

The enticing title Night Soil / Economy of Love refers to Bonajo's (1978, NL) newest film in her trilogy Night Soil. Whereas the first part of the trilogy, Night Soil / Fake Paradise(2014), explores the cultural affect of hallucinogens and human connection to nature,Night Soil / Economy of Love (2015) portrays a Brooklyn-based movement of female sex workers, regarding their work as a way for women to reclaim power in a male-dominated pleasure zone; their mission being to rearrange sexual conventions and ideas about intimacy itself. Vivid imagery is accompanied by a spoken score, revealing Bonajo's vision on contemporary spirituality and expectations surrounding gender roles by playful, sensual, and feminist-driven means. In a world where a swipe to the right on a smartphone can grant access to supermarket sex, where social media tend to create an alternate form of loneliness, and where we are increasingly disconnected from the physical world, Bonajo questions the complex relationships that exist within and without the natural world, challenging the traditional notions that divide nature, people, and technology. She looks to environmental activism and, in particular, how that activism is leveraged illegally against global capitalism.

Besides the world premiere of Night Soil / Economy of Love, Bonajo shows an overview of her ever-growing series of photographs based on actions and performance. Some mysteriously endearing, some refreshingly provocative, these photographs depict human's attitude to nature, environmental conditions and transformative power structures. In her work, Bonajo examines the paradoxes inherent to ideas of comfort with a strong sense for community, equality, and body-politics. Through her videos, performances, photographs and installations, she studies subjects related to how technological advances and commodity-based pleasures increase feelings of alienation, removing a sense of belonging in an individual. Captivated by concepts of the divine, Bonajo explores the spiritual emptiness of her generation, examines peoples’ shifting relationship with nature and tries to understand existential questions by reflecting on our domestic situation, ideas around classification, concepts of home, gender and attitudes towards value.

Bonajo's work has been exhibited and performed in international art institutions, such as De Appel Arts Centre, Amsterdam; Centre for Contemporary Art, Warsaw; the Stedelijk Museum, Amsterdam; The Moscow Biennale; National Museum of Modern and Contemporary Art, Seoul, and PPOW Gallery, New York. Her films have been screened at festivals such as the International Documentary Film Festival Amsterdam (IDFA) and the Berlinale. In 2012 she initiated the collective Genital International, which tackles subjects around feminism, participation, equality, our Earth, ‘Politics beyond Polarity’ and ‘Revolution through Relaxation.' Bonajo has contributed to several art magazines, was creative editor of Capricious Magazine, and curated various shows, such as the QQC Performance Festival about pop music in visual arts at the Paradiso, Amsterdam. She published several books, including: Modern Life of the Soul, I Have a Room with Everything, Spheres and Furniture Bondage. In 2013 she released an album with her band Z▲Z▲Z◎Z◎ called Inua. Bonajo studied at the Gerrit Rietveld Academy and completed residencies at a.o. ISCP in New York (2014) and the Rijksakademie voor Beeldende Kunst in Amsterdam (2009-10). She lives and works in Amsterdam and New York.
www.akinci.nl