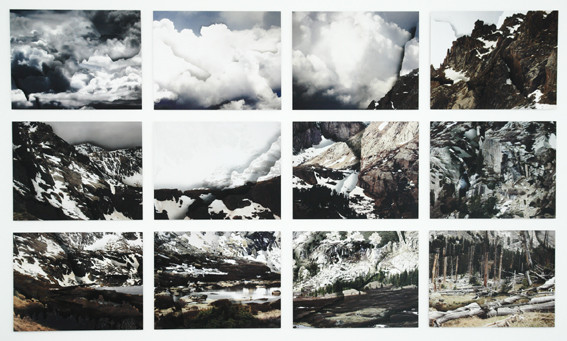 The work of Persijn Broersen (b. 1974 in Delft) and Margit Lukács (b. 1973 in Amsterdam) is characterized by a quest for the sources of contemporary visual culture. With intricate layers of depersonalization, re-mediation and re-interpretation they demonstrate how reality, (mass)media and fiction are strongly intertwined in contemporary society.

In their first show at AKINCI, Places We Know, Persijn Broersen en Margit Lukács present new work, in which they unravel the layered surface of America. Meandering through intricate layers of cut-out photos of the American Wilderness, they deconstruct and recreate the hinterland based on Walt Disney’s classic film Bambi and the painter Albert Bierstadt’s (b. 1830 in Solingen) vision of the West. In this way, Broersen and Lukács create metaphors for places that are deeply rooted in the collective imagination.

The video Mastering Bambi is based on Walt Disney’s 1942 classic. In Bambi, Disney created one of the first virtual worlds. It was a world in which Disney strove to create a deceptive realism, a harmonious world in which man is the only enemy. This romantic wilderness, stripped of its inhabitants, has been reconstructed by Broersen and Lukács in Mastering Bambi.

Berend Dubbe and Gwendolyn Thomas reconstructed Bambi's soundtrack, in which they twist and fold the music in such a way that it reveals Bambi's incongruity.

In The Present Absent – (After Bierstadt’s ‘Storm in the Rocky Mountains’, Mt Rosalie, 1866), Broersen and Lukács apply a similar principle of deconstruction and creation. Bierstadt was one of the Hudson River Group, a group of American landscape painters who were influenced by Romanticism. He is mainly known for his expansive landscapes from the American West. Bierstadt’s paintings make use of reality, but in fact they depict a concept of the ideal landscape.

In The Present Absent Broersen and Lukács show the shadows of the world that lies hidden below the surface, the imaginary world that Bierstadt painted but is a long way from the place on which it is based.

Persijn Broersen and Margit Lukács work as an artistic duo from their base in Amsterdam. They studied at the Sandberg Institute, Amsterdam and at the Rijksacademie(2008), Amsterdam. They have recently exhibited their work at the WorldExpo, Shanghai (2010), the Mukha in Antwerp (2009) and in the Stedelijk Museum, Amsterdam (2008).

Berend Dubbe started his musical career as drummer in the pop group ‘Bettie Serveert’ and has produced four albums since 1999, with his project ‘Bauer’. His great love is film music. Gwen Thomas (BA Music Composing) is a composer from Seattle, USA and has worked in several genres from east to west coast. Her work varies between progressive, orchestral, jazz influenced pop music and music for commercials and movies with Berend Dubbe.
www.akinci.nl