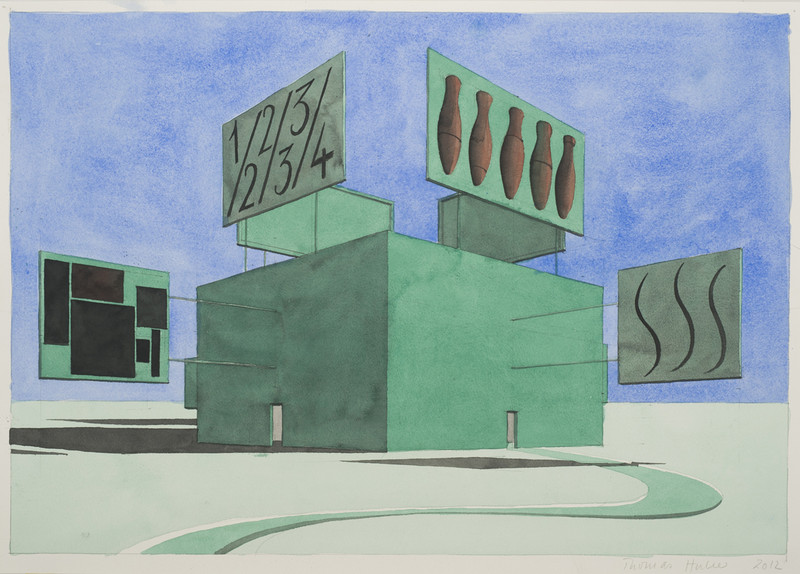 Huberville, a fictive City by a lake, has existed for more than 20 years. Consisting of many public buildings; a museum, a theatre, a library, a radio station, the city continues to expand with each new work by Thomas Huber. Every painting, each newly designed pictorial space, forms part of this city. Huberville has been on display in many places and ways in Europe; as panoramas, models, walk-in sculptures, computer simulations, and as films. Huberville had already established an outpost at AKINCI in 1998. Meantime the city has expanded. New buildings as a fairground have been added to the existing ones. Several large halls have been built on the outskirts of Huberville. Two of these halls; “Measurements” and “Excavation”, will be shown in Amsterdam. Each hall will encapsulate an aspect of the Huberian visual vocabulary in the form of an exhibition. AKINCI will be host to the first of these halls. While the buildings in the city centre are manifestations of the public community-building function of Thomas Huber’s imagery, the expansion of the city ‘fairground’ points to the foundations of his pictures, the grammar of visual language on which Huberville is constructed.
Thomas Huber (1955) born in Zurich, works and lives in Berlin. Recent solo shows are: 2011/12 'VOUS ÊTES ICI, THOMAS HUBER EST AU MAMCO (You are Here. Thomas Huber is in Mamco)' Mamco, Geneva; 2008 exhibition tour 'rauten traurig' (rhombuses sad)', MARTa Herford, in Herford, Germany, Carré d’art, Musée d’art Contemporain de Nîmes, and Kunsthalle Tübingen; 2004 Retrospective 'Kabinett der Bilder (Cabinet of Paintings)' in the Aargauer Kunsthaus in Aarau, Museum Boijmans Van Beuningen in Rotterdam, and the Kaiser Wilhelm Museum and Haus Lange in Krefeld ect. Previous shows by Thomas Huber in the Netherlands: 1992 'Der Duft des Geldes', Centraal Museum Utrecht and 1991 'Boeken/Books', Stedelijk Van Abbemuseum Eindhoven.
www.akinci.nl