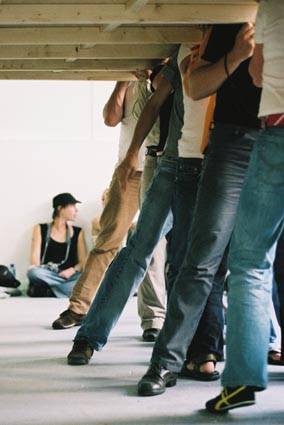 YAEL DAVIDS
"End on Mouth"* - a transformation of a performance

In her upcoming show Yael Davids will analyze the possibilities of representing a performance in absentia.
Is there a system that can register the absence of the performance, the absence of its materiality such as the movement, the effort, the voices, the space and the physical volume of emptiness?
The show End on Mouth is a suggestion of finding an analogue language to the previous works. This show will be an attempt to create a new perception for a past performance, without trying to create a revival of past moments.
A Reader, accompanying this exhibition, will be a help to understand the three different performances of End on Mouth which took place in Istanbul (Platform Garanti), Utrecht and Den Bosch (as part of the project ‘If I Can’t Dance, I Don’t Want To Be Part of Your Revolution’ curated by Frédérique Bergholtz and Annie Fletcher). End on Mouth is a performance in progress. In every station it developed and changed, adapting to the environment it was shown in, such as the conditions and the architecture of the spaces, the local language, the culture and the people who took part in it. End on Mouth took shape as it came into existence. In Istanbul it took place under the influence of the Turkish culture, the tradition of music and the ‘hamal’ (these carriers in Istanbul dominated for centuries the streets as they carried heavy loads from one place to another). The music played with traditional instruments was experimental and minimal. It was an undertone or counterpoint to the speech of the actors.
By reading the Reader one grasps the remains of the performances or in the words of the artist: “...the Reader transforms the past performance into a structure of language – a structure which needs to be readjusted again and again to its environment; one could say language as movement...”.
“...So while reading it one could imagine directing the performance...”.

* Two closed big boxes were situated in the exhibition space. In these closed boxes a small group of musicians and actors were playing. With the help of twenty-two carriers the boxes were moved around in the space according to a specific choreography.

Language and space played a major role. Local people arranged a special composition and the choreography of the work was changed in relation to the space itself.

The act was repeated several times with a small alteration in the choreography between each variation. The duration of the performance was approximately two hours.