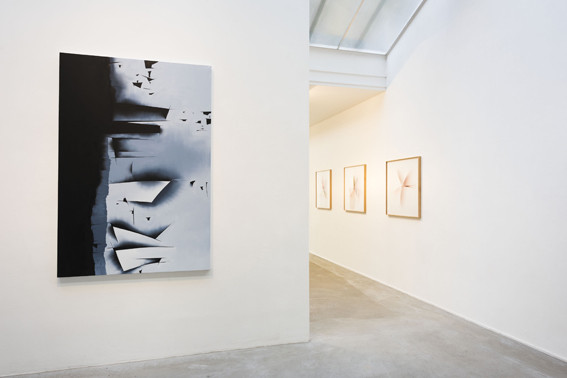 We are proud to announce our exhibition with Zbigniew Rogalski, titled Scarification. Zbigniew Rogalski who debuted around 2000, is one of the most significant representatives of Polish artists of his genera‐ tion. With the exemplification of visual illusion, such as reflection and obliteration, Rogalski questions reality and its mode of representation.

The title involves the idea of 'scratching, etching, burning of designs and pictures into the skin as a perma‐ nent body modification'. Originally from the Greek word skariphos hinting at the usage of a pencil or skariphasthai which involved the idea of 'scratching an outline, making a sketch' the word transformed to Latin scarifare, defining the act to 'scratch open'. The word evolved in Old French into scarification (14th c.) defining the 'act of covering with scratches or slight cuts'. In botanical terms, scarification refers to the process of splitting a seed’s outer layer. Scarification is often used in agriculture to 'start' the process of germination in order to preserve the diversity of crops.

Rogalski has often been called ‘a director of paintings’, as he moves with great ease both in the regions of painting, photography and film, mixing them and taking advantage of several disciplines. Through the ex‐ ercise of painting itself, questions are raised, encouraging the viewers' interpretation of what is seen while simultaneously forming a critical position. This position is repeatedly obscured and hinted at through pain‐ terly solutions as well as the inclusion of photographic material or maybe the allusion thereof. Rogalski suc ‐ceeds in restoring a visionary element in painting and does so in a very suggestive manner. The surface of the painting becomes for a short while a screen on which the obsessions, fears and revelations of our con‐ scious‐ness are being displayed.

In recent works Rogalski more often played with the idea that the painting is a surface the viewer would like to enter. More so, the viewer at AKINCI will be confronted with the (scary) idea of penetrating the void behind the surface of the painting which reveals itself by the cuts painted into it. In fact, the surface has a suggestion of paper, which has been cut and destroyed in order to reveal names of cities. Rogalski lays bare secrets behind these names which cannot be put into words but are transformed by him into an enigmatic painterly language. History, revolutions, wars and fears about events still to come are hidden in these names and form the nature of the places they represent. Instead of obscuring the painterly surface as in his earlier works, Rogalski sheds light upon their surface in order to bring out what protrudes from the dark ‐ an effect contrary to a lightbox. The paintings stand in a shrill contrast to the photgraphs in the exhibition which reveal the other hopeful meaning of the word scarification: children standing in the dark holding torches and a series of photographs titled 'Fairy Tales' that show papercuts from which soft col‐ oured light emerge. The works in this exhibition give evidence to Rogalski's constant quest for different points of view.