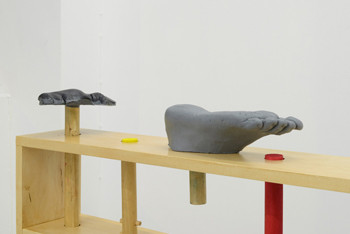 Albert Baronian is pleased to announce the first solo exhibition in Europe of Los Angeles based artist Erik Frydenborg.

In the Room, Erik Frydenborg presents Full Color Bachelor, a recursive revival of three high modern motifs: the bachelor machine, the body print, and the process cast. In each case, Frydenborg applies exaggerated notions of artificiality and automation to these resurrected subjects, with new works that examine auxiliary connections between the printed page and the human operator.

Michel Carrouges defined the bachelor machine as “an impossible, useless, incomprehensible, delirious machine... unfinished, unfinishable, and incapable of operating in reality.” Frydenborg’s Full Color Bachelors are a discarded library’s worth of these imaginary devices-- a narcotically uniform menu of variable specimens, analogous to an app store interface, a butterfly collection, a patent catalog, or a tattoo parlor’s flash wall. These aggregated collages—composed from thousands of dismembered encyclopedia illustrations, reassigned from explanation and affixed to the endpapers from their sources—comprise a sort of bachelor database. Their multitude suggests a production schema as mechanized as their subject, assimilating each discreetly specific machine into a rhythmic, repetitive operating system.

With Traceman (AUT03), Frydenborg revisits the body print or anthropometry (as named by Yves Klein) Body printing, first seen in 40,000 year old hand stencils on the walls of Spanish caves, is more associated through its modern use with theatrical carnality and expressive abandon. In contrast to this immediacy of touch, Frydenborg pursues the effects of delay, using a synthetic interlocutor to make contact with the page. Produced via prosthetic casts of his own extremities, Frydenborg’s print ‘assumes the position’, in a careful mimicry of marking with the primal body. Several times removed from its libidinal origins, this mediated self-impression--registered in corresponding layers of CMYK process inks— communicates with the halting, affectless cadence of a speech synthesizer.

The printing device itself is manifest as Processor, an index of lifecast silicone extremities that have been converted into functional rubber stamps. Collated in a basic wooden rack, these prosthetics are displayed with hyperbolic rationality, like a museum’s speculative reconstruction of an antique apparatus. Recalling the closed-circuit literality of cast body works like Bruce Nauman’s Hand to Mouth, Frydenborg’s process piece curiously reads less as a primary object and more as an historical recreation, even as its components display obvious evidence of use.

With Full Color Bachelor, Frydenborg channels fantasies and anxieties of post-human replication using outmoded, Industrial era technologies—elegiac remnants of future shock, intimating the long arc of
conjecture. Like a story of abraded fingerprints on a fossilized hand, they imagine archival documents that elude authentication, while indisputably arriving from another time and place.
www.albertbaronian.com