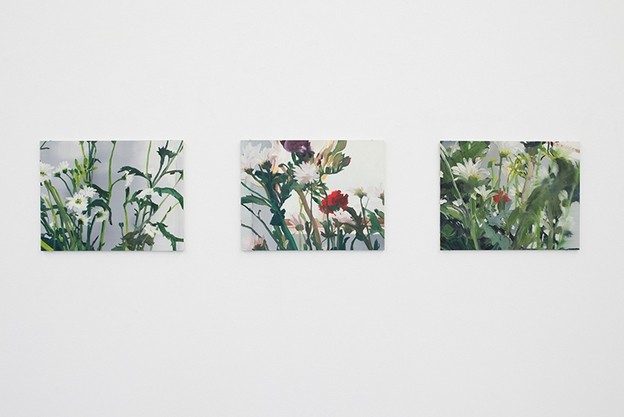 “Perhaps it is thanks to the flowers that I became a painter ”, declared Claude Monet. Since Antiquity, how many vocations must they have inspired... They decorated Egyptian tombs and Roman villas, medieval manuscripts and Renaissance frescoes, or even oriental prints. They contributed towards the glory of Flemish and Dutch painters who created a specific genre of still life from them, available to all emotional, symbolic, philosophical and metaphysical projections. Then, the perfection of the imitation had to confer upon the painted image a higher value, an opportunity to think.

Whilst abandoning this idea of representation, Edouard Manet kept his more private paintings of flowers, he also presented them to be admired, in their concision, in his letters. Claude Monet declined all their varieties throughout his life. Photographers, from the outset, have made them a subject of predilection, captivated by the moving contrast of temporalities, between the ephemeral natural beauty and the persistence of the image. In the 20th century, the greatest artists relentlessly took up this inexhaustible source again; even the Masters of abstraction did not abandon this subject, as if they saw it as a bedrock of art, rather than a mere mimetism.

Piet Mondrian completed nearly 150 paintings and drawings featuring a flower, most often solitary. They remained discredited for a long time, undoubtedly because they seemed to completely oppose Neoplasticism and, also, because the artist admitted that he painted them in order to earn enough to live off. But his pleasure remains perceptible, his interest obvious. How can we not see a structural research, an experience of colour and space, and even sometimes a decomposition of form, which fully take part in his investigations? Doesn't the single flower express, also, the loneliness that was experienced when his abstract paintings remained misunderstood? It has maintained, throughout its life, contact with nature, at the origin of its art. It can be compared, by its vibrant and singular presence, to a true portrait, like the majority of the works gathered in this exhibition. In the same way the line drawings of Ellsworth Kelly, based on models which he always remembered accurately, even a long time after executing them. The research of an essential structure is exacerbated by the smoothness of a line without the slightest repentance, which structures the design space with a rare power. The extreme clarification towards which all the work is aimed, even the monumental monochromes, draws its sources from reality in order to release from it the pure form. Rather than asceticism, for the artist it was a matter of pleasure...

It is this pleasure which has guided the exhibition, that of an infinite renewal, manifest in all of the presented works. From the sumptuous peony to the humblest wild flower, no image ever seems to exhaust the reason or the creative renewal, even in the most subtle variations. Each iteration tries to tame and to nourish wonderment, which remains mysterious to the understanding, but unrivalled with nature. The artists brought together here, in spite of the diversity of career and means of expression (painting and drawing, photography, sculpture and assembly), tend, it seems, to bring closer immediate perception and understanding of the natural, cultural and indeed the political world. The freedom of formal research and the general economy of resources convey a quite real humility in front of the complexity and the plenitude of the living, its delicacy and its frailty, also. In close partnership with one moment, one place or one person, flowers, in art, are just like in life intrinsically linked with giving. It is to experience the work and question the image that the viewer is invited.

Whilst for Baudelaire the poetic ideal remains inaccessible, as the poem “Elevation” expresses, from which the last verse is borrowed as a title, no flower appears to cause the “despair of the painter” (unsuitable name for the Heuchera). The absence of a term to understand, the absence of definitive terms to say “the language of the flowers and mute things” is the foundation of any artistic engagement, from creation to reception.