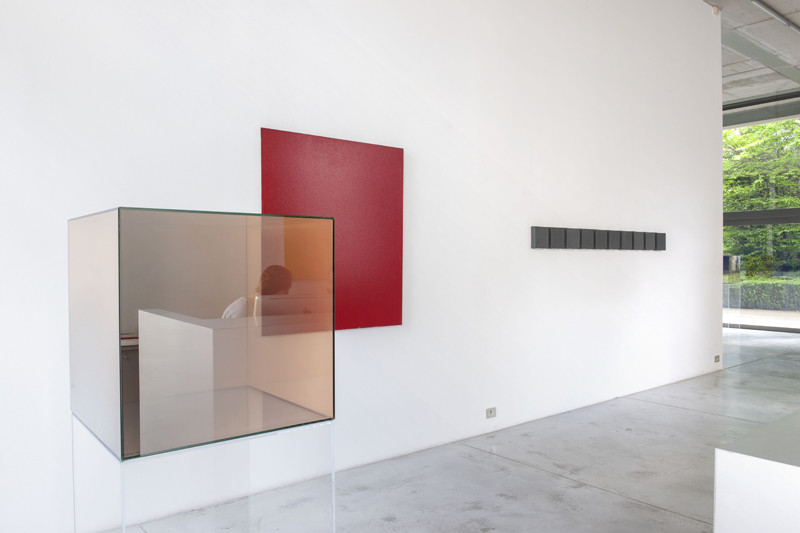 In a widely read article on GalleristNY.com, the young painter Joshua Smith reviewed an exhibition of an elder Josh Smith, which consisted, in part, of a roomful of monochrome paintings. The younger artist argued in the piece, that every painter of monochromes has a unique purpose for engaging with the practice. This exhibition assembles artists from different generations and backgrounds, each of whom make use of the monochrome for diverse reasons. The title of our exhibition; Monocrime playfully refers to a varying degree of “monochromeness” on view, and with the historic position of the monochrome as a symbol of, or site for oppositional or even radical practices and politics.

Of the most prominent and radical living painters; Olivier Mosset is a massive influence to generations of artists. From his earliest work with the Parisian B.M.P.T. group to his current work engulfing everything since (his iconic circles, monochromes, neo-geo works and more) his practice highlights the political dimension of abstraction and the reciprocal limits of what might be accomplished with it. Conceptual and comic, rigorous and casual, his practice is marked by an engaged indifference. The paintings shown here: the dichromatic diptych “Over Easy” (1987) and his “Untitled” (2005), 6 blue monochrome canvases using a rubber polymer paint typically used for industrial purposes. These works illustrate the artist’s blurring of the unique and the routine, challenging typical notions of authorship in the process.

For the past five years Joshua Smith’s practice has consisted exclusively of small monochrome canvases. Unassuming in appearance, his work has sought to privilege an “experience of looking”. For Monocrime, Smith debuts a new body of shaped canvases, introducing a new degree of abstraction to his works, and at scale that dramatizes the physicality of both the objects, as well as the viewers who see them. His new unique and linear forms seem to dance across the walls they hang on. The artist casually dismisses the common practice of dramatizing the labour of art-making saying instead that both artists and viewers should expect more from art; fearing the cynical dismissal of “something like profundity or let alone, say, joy”.

Joseph Marioni’s paintings aren’t vehicles for any ideological or theoretical stance. Instead they are actual, powerful paintings, emphasizing the artist’s use of colour and light. For him the monochrome is precisely a painting of a single colour. But such a minimal description might undermine the complexity of his process and the richness of his results. Throughout the process of applying separate waves of acrylic, the canvas is held upright so that the liquid pigment flows toward the bottom of the works in pools of beautiful paint. The many undercoats of vivid paint give the works a luminescence and presence that can simply only be experienced in person.

Alan Charlton is a painter for whom colour is of great significance. Initially using utilitarian, industrial colours that were mass-produced for manufacturing (reds, greens and others) he eventually arrived at his signature use of grey; a colour with few associations, and little emotional symbolism. Working in grey for several decades now; his work invites viewers to focus on the forms he employs (crosses, rectangles, triangles, squares, etc); emphasizing the work’s place on the wall. For Charlton it’s important that his work maintains a relationship to the space it exists in. His paintings change our relationship to our environments, by highlighting the area within and around the works and asking us to seriously consider the spaces we occupy.

Marcia Hafif was a key member (along with Marioni and Mosset) of an informal, New York-based group, which practiced what was later labelled “radical painting”. The artists led a critical and deconstructive debate concerning painting and its pictorial history. Hafif’s works rigorously explore numerous formats, mediums, and combinations of each. While some may feel that the monochrome is perhaps “insufficient”, in content, Hafif states it “is open and receptive and ‘empty’; it is non-specific and changing according to time, location, and viewer.” It is thus explicitly brimming with content.
Shown here are two works from the 1990s, “French Painting: Jaurès” and “Glaze Painting: Indigo”.
The first is from a series made during a stay in Lyon, a more subdued oil on linen square canvas. The other employs a brightly coloured glaze, consisting of varnish, turpentine and oil, applied over a white ground.

Pieter Vermeersch’s works stunningly return intangible images to literal forms. His shimmering colour-field paintings may appear classically non-representational, but are in fact based on ‘real’ images, often sourced from personal photographs of images without special reference. His work is an effort to break the illusory fabric of both photography and painting’s two-dimensional pictorial surface – as he mars these works’ surfaces to reveal the forms beneath the picture planes themselves. In these new works the artist almost physically attacks a meticulously constructed image; which had prior been a picture close to an ideal or perfection.

Larry Bell, a leading figure of the Light and Space Movement of the 1960s is most commonly known for his minimalist sculptures—transparent cubes that thrive on the interplay of shape, light, and environment. Although Bell had early success with Abstract Expressionist painting, a day-job at a frame shop led him to experiment with excess scraps of glass, thus beginning his fascination with the material’s interaction with light. Bell’s first series of cubes combined three-dimensional glass forms with transmitted light, creating illusions of perspective through angles, ellipses, and mirrors. His more recent and smaller cubes go beyond a re-reading of minimalism to explore our traditional relationship to contemporary art. They question the “White Cube” of the gallery space and the impossibility of ever grasping the “true” essence of art objects.

The young Swedish artist Paul Fägerskiöld, whose painting here falls between dense polychromatic pointillism and monochrome painting, is a maverick in this exhibition. Made by using a dripping and spitting technique with cans spray paint, his floating pools of colour are an earnest attempt to represent colour unto itself. As the viewer approaches the painting the image dissolves to reveal its constituent formal elements, in the vein of early 20th century pointillism. Fägerskiöld embraces this history of impressionism and of the later colour-field painting of the 1950s and 1960s which his work might call to mind. His primary concerns though lie more less within the mining of particular histories and more with a continued investigation of colour-theory, cognition and language.
www.albertbaronian.com