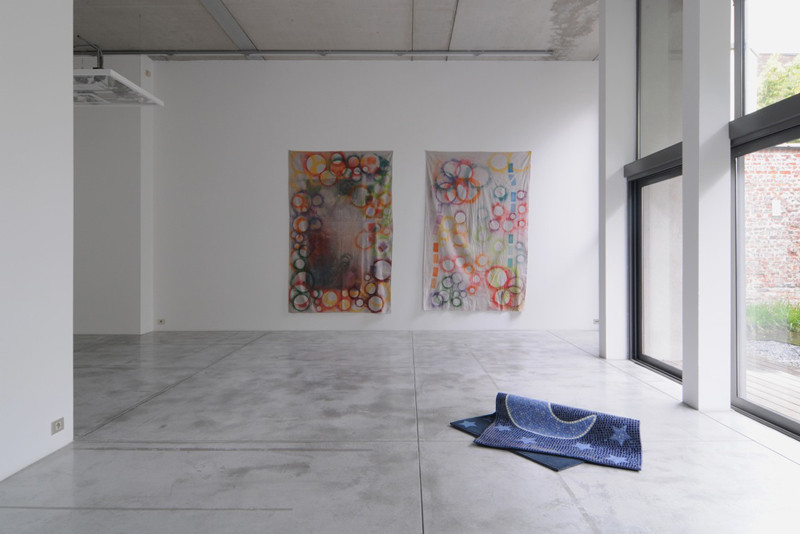 The exhibition will focus on current modes of image making and how these are translated into sculpture, painting and other means of expression. The works presented here are interested in how the photographic processes, both digital and analogue, are related to materiality and how this can create a dissonance between image and material. They investigate how pictures can function as stand-ins for our physical surroundings and alienate the viewer from an image, with the multiplication of information that is simultaneously transmitted and received.

The proliferation of image production and consumption is changing the way we experience every aspect of life, altering our perception and understanding of everyday reality. According to Michel de Certeau in “The Practice of Everyday Life”, the mere consumption of images turns into a re-appropriation of objects, images and ideas and produces a constantly changing bricolage of practices that shape daily life. Thus consumption becomes a potentially subversive or even treacherous tactic of selection and combination: images are sourced and used because of the interest in their representations of something specific and their own indexical history. The title “Stand-in” not only refers to its meaning as a surrogate for something but also brings up the idea of the body double or the substitute for a motion-picture performer during dangerous scenes.

In Sean Kennedy’s works the translation from object to image and material to information is effected by his use of overhead space. An agglomeration of elements is put on top of two framed clear acrylic glass panels that hang overhead between ceiling and floor, creating a picture-like effect. The objects are arranged according to a meticulous scheme forming a tableau. This reveals the artists’ interest in how space is organized and how by putting them out of reach, objects can become representations of themselves and turn into props. As such the glass surfaces are transformed into many different things: window, tabletop, storefront, basketball backboard, shelf − focusing on their storage and display function. By using a flat horizontal plane, a certain democracy between the elements is produced, while establishing a relationship with photography, scanning, drawings and painting.

Out of Ry Rocklen’s interest in mundane objects and their formal familiarity arose two new sculptures and one wall-based work. With Analia’s Ladder the artist transformed a high resolution photograph of a ladder into a three-dimensional object, while keeping the two-dimensional nature of the image intact. This results in a graceful and somewhat theatrical and absurd sculptural work which is stripped of its purpose and familiarity. For a second work, Rocklen found a blue carpet with a picture of a moon, fibreglassed and covered it with bathroom mosaic tiles reflecting the original colours and image. Similarly the artist covered a crewel embroidery depicting Van Gogh’s sunflowers with copper and gold plating, while adding his signature next to that of the artisan and the original artist. With a permissive attitude towards abandoned debris or kitsch and by adding a seductive touch of bling, the artist gives them a new life in a different realm.

Asha Schechter is interested in how the form and content of an image delimit its consumption and lifespan. The visual landscape of Los Angeles continually shifts together with the increasing availability of stock images and cheaper production. Today we incessantly digest multiple images at once in the real and virtual world. This simultaneity is echoed in Schechter’s works, which consist of different layers taken from various cultural and material sources. This is visible in his series of newsprint works where textile patterns, referencing specific brands, fabrics and subcultures, are printed onto his community newspaper, “The Park La Brea News”. The dual planes intermingle content, by confusing background and foreground while expanding the meaning of both. In the three large-scale prints on view scans of fabric are combined with stock 3-D models typically used for commercial purposes as in video games and advertising. The juxtaposition of real and synthetic materials mirrors the construction of visual culture at present, but rather than cloaking it in naturalized artifice, these works bring the tension between them to the surface.

Sam Falls’ work often starts out of a photographic investigation in order to bridge the distance between different mediums and techniques, such as painting and sculpture. In a new body of work, Falls is using planting pots to further exploit his interest in abstract representation, the intersection of colour and exploitation of materials. For instance, in Untitled (Pots, Blue 3) pots are arranged in a still-life photograph, covered with circular print patterns made by applying paint on the edges of the pots and stamping them onto the image. The pots that are depicted translate into a sculpture, eventually spray painted into bright colours, while the drop cloths – which are remnants of the process of painting and making the sculptures - turn into beautiful abstract fabric works, of which two are included in the exhibition, Untitled (Dropcloth, Pots, 1 + 2 ). For Sam Falls the focus is not on what is in the picture (nor even in reality), but what it is that the viewer is looking at and how one can come up with one’s own reading which is considered as valid as the artists’ intention. The question these works raise, beyond a medium's ability to represent an object or idea, is a question of perception itself and how we relate today to photography and painting.

In her practice Amanda Ross-Ho uses a wide variety of forms as vehicles through which a rigorous investigation of visual language is embedded. Her work unites seemingly oppositional languages and spaces: autobiographical artefacts are elaborated for formal qualities while traces and residues from studio and gallery practice are recreated as deliberate gestures. In many of her works visual translations and shifts of scale and time appear. This happens with Untitled Centerfold (CAMERA AUSTRIA), which was originally produced as a print layout for the magazine Camera Austria, as a part of a portfolio curated by Sharon Lockhart. The images traffic on elements of photography, more specifically the relationship of the artist to the medium via her family autobiography and her personal history in performative gesture. Subsequently the layout was realized as a full-scale architectural work – the Centerfold. The second work of Ross-Ho on show, Untitled Hole #2 (Don’t Front), was first realized as a part of an installation for the Bellwether gallery, NY. Initially developed for a spread in the accompanying exhibition catalog, the composition was then translated exactly to scale in the exhibition space. The photograph itself is an image originally shot within an installation where Ross-Ho cut five core samples out of the sheetrock of the exhibition space and used these to construct a box in the middle of the room. The resulting holes function as a two-dimensional presentation, furthering a discussion of the push and pull of dimensionality, consumption, economy and loss.

Amanda Ross-Ho (b. 1975, Chicago, IL) presently has two concurrent solo shows at Mitchell-Innes and Nash, New York and Shane Campbell, Chicago. In July 2013 she will present a large-scale public project at The Museum of Contemporary Art, Chicago. Her recent solo exhibition at the Los Angeles Museum of Contemporary Art was accompanied by a comprehensive catalogue and her work has been included in exhibitions at the Museum of Modern Art, New York; Orange County Museum of Art, Newport Beach; Pomona College Museum of Art; Henry Art Gallery, Seattle; and in the 2008 Whitney Biennial.

Sean Kennedy (b. 1983, Akron, OH) studied at the Städelschule, Frankfurt am Main, Germany and received his MFA from the University of Southern California. Previous solo/duo exhibitions include: Sean Kennedy / Chadwick Rantanen at UNTITLED, New York, NY and at Thomas Duncan Gallery, Los Angeles, CA and Jancar Jones Gallery, San Francisco, CA. His work was recently included in group exhibitions at Mary Mary, Glasgow, UK (together with Matthew Cerletty and Mateo Tanatt), Brand New Gallery, Milan, Italy and in PAINT THINGS: Beyond the Stretcher, deCordova Sculpture Park and Museum, Lincoln, MA. In the fall of 2013 he will have his second solo exhibition at Thomas Duncan gallery, Los Angeles, CA.

Sam Falls (b. 1984, San Diego, CA) received his BA from Reed College in 2007 and MFA from ICP-Bard in 2010. Falls’ work has been widely exhibited, including solo exhibitions at American Contemporary, NY, Printed Matter Inc., NY, West Street Gallery, NY, Luce Gallery, Torino, Italy, M+B, Los Angeles. His forthcoming exhibitions are at T293, Rome, Italy, Eva Presenhuber, Zurich, Balice Hertling, Paris and LA><ART, Los Angeles. Recently he joined Metro Pictures, NY. Falls was listed as one of Modern Painters’ "100 Artists to Watch," chosen for ARTFORUM's "Best of 2011 - Critics' Pick" and named as one of the "Top 30 Under 30" for Forbes by Jeffrey Deitch.

Ry Rocklen (b. 1978, Los Angeles, CA)’s work recently was the subject of solo exhibitions at Thomas Solomon gallery, Los Angeles, UNTITLED, New York and ZZZ at the Visual Arts Center, The University of Texas at Austin, TX. In 2009 he had a solo exhibition Time After Time at Baronian Francey, Brussels. His work has been included in group exhibitions such as the first Los Angeles Biennial Made in L.A. (2012) at the Hammer Museum, Venice Beach Biennial (2012) curated by Ali Subotnick, PS1 in New York and the Whitney Museum (for the 2008 Whitney Biennial) in New York. In the past year he participated in group shows at Brand New Gallery, Milan, Italy and Tanya Bonakdar gallery, NY. Recently he joined galerie Praz-Delavallade, Paris.

Asha Schechter (b. 1978, Portland, OR) received his MFA from the University of California Los Angeles (UCLA) in 2009. He has participated in group shows such as Broken Umbrellas at Laurel Gitlen Gallery, NY, Productive Steps (curated by Sam Falls & Lucas Blalock) at Mount Trempner, NY and Public Relations at Night Gallery, Los Angeles, CA. Recently his work was included in Needles in the Camel’s Eye at Thomas Duncan gallery, Los Angeles, Things, Words and Consequences (curated by Sanya Kantarovsky) at Moscow Museum of Modern Art, Russia and Tatjana Pieters Gallery, Ghent, Belgium. He has a forthcoming solo exhibition at The Finley, Los Angeles, CA. Next to this he is running a project space in his own apartment under the name of The Vanity.
www.albertbaronian.com