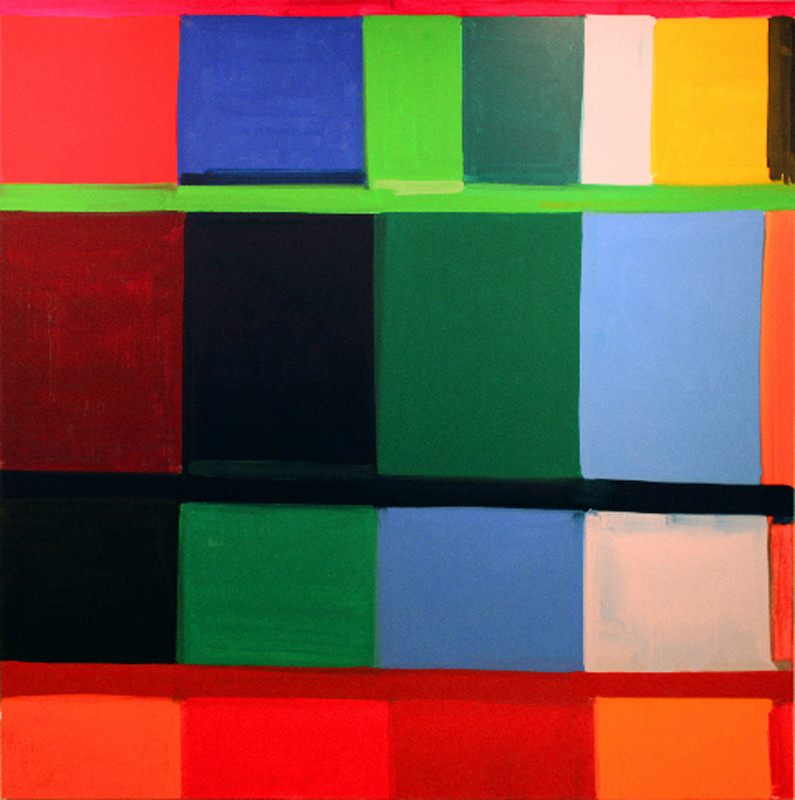 The title of the exhibition, “Goya’s Lantern ”, which is also the title of one of Whitney’s paintings, is, like most of his  paintings, inspired by music, poetry and his love of reading.

For almost thirty years Whitney has been exploring two  central aspects of abstract painting: Colour and structure.
Colour is what structures the paintings. For a long time Whitney has been working with square  canvasses of different sizes, which he structures with up to four unequal bands consisting of one or more  lines the width of a paintbrush. Starting from the top left–almost like writing a text–he fills the bands  with a series of non-uniform rectangles and squares of different colour. This process, which ends at the  bottom right of the canvas, can be repeated two or three times. The choice of colour is intuitive and the  result of the painting process which is unpredictable an unknown.

Whitney works with the system of “call-and-response”, which is a principle used across multiple  disciplines, and in music is typical in spirituals, gospels, blues and jazz. He paints one colour and then  decides which colour responds to the first one. This very simple principle results in the fact that the same  colour is almost never used twice and the colours become more and more complex.

Despite their complex colour scheme Whitney’s compositions are always harmonic and show his joy for  colour and composition. They are rhythmic, melodic, and intense. „The idea is sound through colour,  creating a polyrhythm and confronting something very beautiful with a lot of humanity to see something  that you think you know but then realize you don’t“ (Stanley Whitney).
Stanley Whitney was born in 1946 in Philadelphia and currently lives and works in New York and Solignano, Italy.  His works have been featured in numerous international exhibitions since the early seventies. His work was part of  the 50th Venice Biennale (2003) in the project Utopia Station, and was also shown in the Dakar Biennial (2004).  Museum exhibitions include the National Academy Museum, New York (2012), the Nelson-Atkins Museum of Art,  Kansas City (2008), the University of Dayton, Dayton, Ohio (1991), the Pennsylvania Academy of Fine Arts,  Philadelphia (1985), the Brooklyn Academy of Music (1983), the Alternative Museum, New York (1981), the Studio  Museum in Harlem (1981) and the Aldrich Museum of Contemporary Art, Ridgefield (1976). He is the recipient of  the John Guggenheim Fellowship (1996) and Pollock-Krasner Fellowship (2002) as well as winning the First Robert  De Niro Sr. Prize in Painting (2011).
www.albertbaronian.com