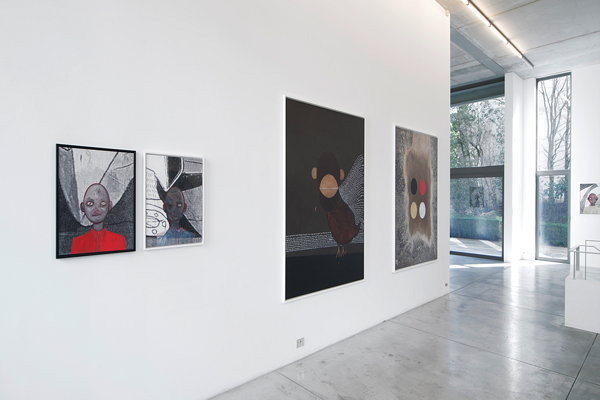 As an all-round artist who has been active on the large international stage of contemporary art for the past 15-odd years, Thomas Zipp never fails to amaze us. Zipp paints, draws, sculpts and invents almost “surrealist” machines. Using the most unusual creations taken straight from an age-old anthology, he created an event held at the Venetian Palazzo Rossini in 2013 with the amazing installation of a fictitious clinic entitled: “Comparative Investigation about the Disposition of the Width of a Circle” (1). The work makes reference to both Charcot’s research (on hysteria at the La Salpétrière hospital in Paris) and David Bowie’s song (taken from the album The Man Who Sold The World, 1970), which deals with his fight against drug addiction and the devil!

This new collection of paintings is currently exhibited in Brussels and revives the figures, portraits and features that characterise Zipp’s style, while at the same time attempting to capture a certain sensation. The look of concentration on the faces of his portraits really draws in the spectators and the background of the paintings forms a raster work that reminds us of pixels or the cryptographic layers of coded digital messages. From this a specific atmosphere emerges through the use of iridescent and shimmering colours. Another aspect of particular concern to the artist is light and he uses it to produce a climax, which gives the impression of movement. In his representation of The Last Supper, inspired by Leonardo da Vinci, Zipp offers an entirely new vision and interpretation of this classic work through the characteristics that are typical of his oeuvre. As indicated by the artist himself, this collection evokes the psychophysiological research conducted by Karl Theodor Fechner (1860), which explores the behavioural changes caused by the relationship between the physical aspect and mental stimuli of the subject, more specifically with regard to the patients’ faces. His compositions furthermore recall the apparition of UFOs, spotted above Brussels in 1989. A book published in 1991 tells the story of this extremely strange news item! The artist combines these different sources with elements of his societal observations, and what he observes in the psychology and behaviour of people during a given era, to compose his paintings and poetic images. Scientific research and the interfaces between the different media provide a constant contribution to his extensive visual corpus. In actual fact “this unsettling strangeness” gives rise to an original artistic vision, which is very different to any of the contemporary art movements. Just like a Picasso reinterprets the entire history of art, Thomas Zipp’s propositions emerge as a new aesthetic subjectivity. This particular work appears to be an epiphany in the way James Joyce understood it, meaning an open fragment of reality that will always remain mysterious, as it derives its power of being from several periods and several locations. It is the same intangible sensation Cézanne refers to. This dimension flows through Zipp’s entire oeuvre like a permanent flux.

(1) Comparative Investigation about the Disposition of the Width of a Circle. Certain Elements of this installation will be exhibited at La Centrale for contemporary art (Brussels) during the exposition Connected, which we will be organising as co-curators from 24 March to 28 August 2016.
www.albertbaronian.com