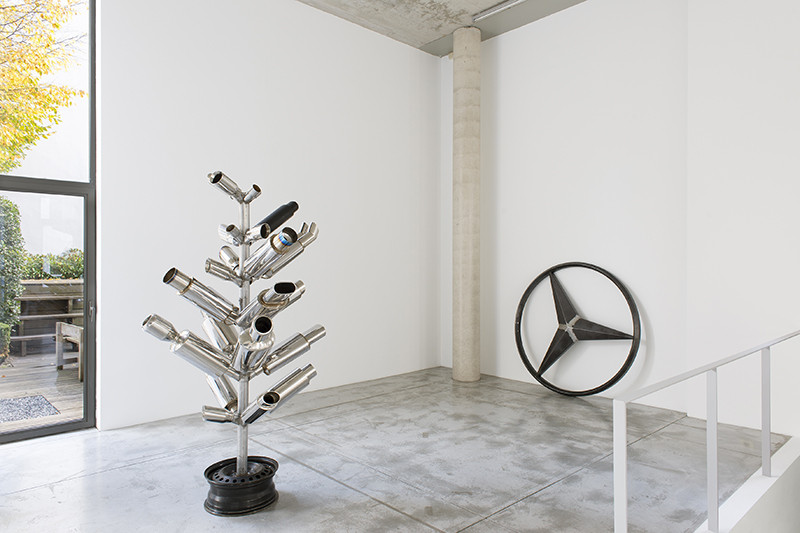 I think the 20th century reaches its highest expression on the highway. Everything is there: the speed and violence of our age; the strange love affair with the machine, with its own death.
J.G. Ballard

Albert Baronian is pleased to present the second solo exhibition of Xavier Mary, entitled « OVER DRIVE ». The works presented here clearly exemplify the themes and fascinations that have been informing his practice ever since his solo presentation at BOZAR in 2006. By giving a contemporary twist to the Duchampian ready-made, the artist relocates industrial objects within the white cube, isolating them from our usual, everyday conception. From carpet motifs to video games, from Khmer temples to hi-res three-dimensional renderings, hybridity is a core element in the understanding of Xavier Mary’s work. His position as an artist is one of constant negotiation between different visual and value regimes, connecting tradition and avant-garde, sincerity and irony, past and future, actual and virtual.

Krauss and Foster (2014), dedicated to the artist’s favorite thinkers, are two works consisting of acoustic panels that usually isolate the roadway noise from the surrounding area. The metal panels are treated using various industrial techniques such as polishing, powdering, sanding or blasting, each leading to a different aesthetic. Noise barriers mark the divide between the linear culture of speed, somewhat nostalgically emblematized by the automobile, and the cyclical structure of the countryside situated behind it (think of meadows, fields, pastures, etc.)
As if to simulate the absent scenic vistas or to somehow conjure their loss, some noise barriers feature abstract designs that turn into rhythmic and almost melodic lines when passing by at high speed. This variation in design was mainly to avoid a monotonous feeling or a tunnel effect for motorists. However, looked at from a less common, frontal perspective, these sound panels become gridded canvases that only vary in color (samples of which are taken from the RAL color chart). Simultaneously, one might also recognize the visuals of popular retro games such as Breakout, released in 1976.

In that very same year, Frank Stella got commissioned for the BMW Art Car Project, where he used a drawing on graph paper to cover the car’s bodywork. As a painter, he was basically treating the car as if it were a shaped canvas. Xavier Mary’s work still carries this same legacy. But instead of searching for the specificity of the medium by reducing it to its “pure essence”, so typical of American modernism (advocated by Greenberg and co.), Mary starts off from the specificity of objects. In this way, one might define his practice as a “reverse engineering” of modernism, disassembling it into its components and putting them back together.

Tree of Woe (2014) is a straightforward reference to Duchamp’s Bottle Rack (1914). Mary found the piece during a residency in New York, in an auto body shop in Willets Point, Queens, a dodgy, industrial area (nicknamed ‘Iron Triangle’) which is now being gentrified. By manipulating the muffler sculpture and putting it in a different, artistic setting, the object practically turns into a monument to the bygone, Fordist era of production.

Much akin to this piece is Wheel of Pain (2014), a display stand for tires. The tires are covered with a specific texture that emphasizes the object’s autonomous existence and material features.
Highway Rings (2013) equally refers to technological culture of speed, conceived by figures like J.G. Ballard or Paul Virilio. The monumental ensemble is produced from guardrails, forming entangled, topological rings exemplary of a ‘hyperbolic geometry’, exceeding the Euclidean model. A similar and more recent version, in the shape of huge five-pointed star, goes by the name of Highway Star (2014).