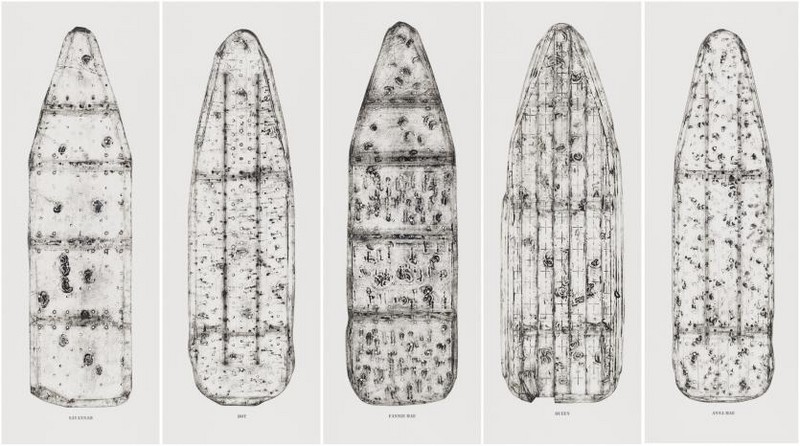 On Saturday, December 1st, Alexander and Bonin will open an exhibition of prints and multiples by sixteen artists: Matthew Benedict, Fernando Bryce, Michael Buthe, Willie Cole, Eugenio Dittborn, Willie Doherty, Mona Hatoum, Diango Hernández, Stefan Kürten, Paul Etienne Lincoln, Jorge Macchi, Rita McBride, Sylvia Plimack Mangold, Doris Salcedo, Sean Scully and Paul Thek. Some of the prints and multiples included in ‘Stimuli’ were executed in relation to large scale projects, while others are self-contained and further explore motifs found throughout the artists’ work.
Prints completed in conjunction with larger projects include Jorge Macchi's large scale Marienbad, 2012 which illustrates his 3-dimensional illusion of the 1961 film, ‘Last Year at Marienbad’ by Alain Resnais. Maachi created the full-scale outdoor piece for the 2011 Lyon Biennale.
Obversely, Doris Salcedo’s Shibboleth I-IV, 2007, four archival pigment inkjet prints were created during the preparation for the fissure she created in the floor at Tate Modern in 2008. In Blueprint, 2011, Rita McBride’s representation of institutional space takes the form of a woodcut based on an elevation of the façade of Museu d'Art Contemporani de Barcelona (MACBA). This print was made during a three year project with the museum, in which McBride removed the layers of temporary construction that had accumulated since Richard Meier’s original design in 1995.

During 2011-12, Willie Cole worked with Highpoint Center for Printmaking in Minneapolis to produce a group of intaglio and relief prints. Five Beauties Rising, a suite of five impressions of ironing boards printed in a monochromatic gray scale impart “a sense of spirituality and suggests grave markers of weathered stone.”1
Each ironing board has the name of a woman printed in relief on the lower edge, suggesting both the legacy of ‘women’s work’ and the psychological residue retained by objects of such intense and specific personal use.
The subjects of Stefan Kürten and Sylvia Plimack Mangold’s paintings are further explored in their prints. As in her paintings, Plimack Mangold works outdoors from direct observation of the trees on the surrounds of her Washingtonville, NY home, etching plates of a maple tree motif that has been central to her work for more than thirty years. Kürten takes advantage of the exactitude of lithography to expand the representation of stillness in an image of a perfect domestic environment.
Multiples in the exhibition include Mona Hatoum’s uncanny object T42 (gold), 1999 a seemingly fused pair of cups and saucers executed in stoneware; a perfume set and boxed explication commemorating Paul Etienne Lincoln’s installation In Tribute to Madame de Pompadour and the Court of Louis XV, 1982-1991; and Diango Hernandez's cast bronze and fabric Lamp-He, 2010.
www.alexanderandbonin.com