Whaddaya Wanna Be, a Flower?! 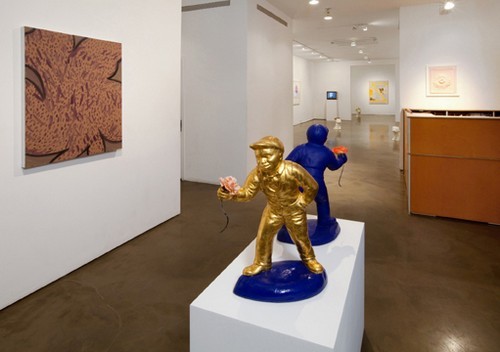 Whaddaya Wanna Be, a Flower?! , featuring the work of John Baldessari, Robert Bordo, Joe Bradley, Peter Coffin, Willie Cole, Mark Grotjahn / Jonas Wood, Jeff Koons, Andrew Kuo, Seth Price, Rob Pruitt, Allison Schulnik and Paul Thek will open Tuesday, June 23rd at Alexander and Bonin.
Taking its title from a casually frenetic 1986 Paul Thek drawing, Whaddaya Wanna Be, a Flower?! uses Thek's query as a point of departure. Whether taken as reflexively modest or as a sly wink at the nature of status, this sentiment highlights our detached reverence for the other.
According to journalist Michael Pollan “Th[e] world-historical consensus about the beauty of flowers, which seems so right and uncontroversial to us, is remarkable when you consider that there are relatively few things in nature whose beauty people haven't had to invent...Flowers have had their poets too, but then never needed them in quite the same way.” If this is understood to be true, the inherent esteem in which flowers are held places them in an interesting place for evaluation.
Just as a false opposition exists between human and nature, so too does an expectation of the sublime or the decorative predetermine the status of the flower in art. In both instances, we need to debase in order to connect. Works in this exhibition employ the floral and the natural in their properly materialistic forms: as memes which reveal themselves to be sexual, corporeal, kitsch, and ultimately already all too human.