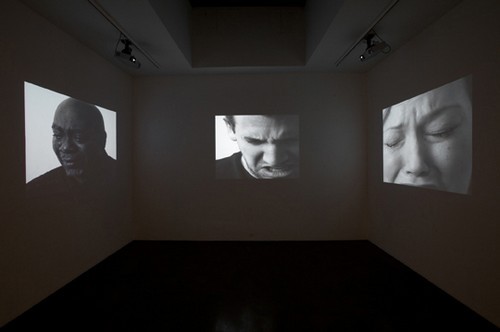 Alexander and Bonin is pleased to announce POST BLACK AND BLUE an exhibition of new works by Willie Cole. In this exhibition, Willie Cole addresses the feelings and memories associated with sorrow and lost love using the mediums of ink on paper, video, painting and sculpture. The exhibition title references the aesthetics of blues music and film noir inspired illustration.

Several of the ink drawings, including cause he was doin her wrong and Walkin Blues, are entitled with phrases derived directly from blues songs by Howling Wolf, Sun House and Robert Johnson. These images speak to the sometimes emotionally charged and violent stories told in blues music.

In Sumsara, a 3-part video installation shot in black-and-white, individuals in states of deep sorrow are projected at enlarged scale. The only clue to the cause of their sorrow is in the title Sumsara, which in Buddhism refers to the human cycle of birth, death and rebirth.

Willie Cole's sculpture has long been known for its use of discarded materials to transform and transcend everyday domestic objects or reference historical events and people. To create his newest sculpture, Three Dog Night, Cole has sculpted 3 larger than life size dogs, feeding on a heart shaped puddle of discarded and misused love. In this exhibition, the artist has returned to painting for the first time since the early 90s. These new paintings, while highly abstracted, depict accumulated objects.

Willie Cole was born in Somerville, NJ and studied at the School of Visual Arts and the Art Students League in New York. He lives in New Jersey. His work has been the subject of several one-person museum exhibitions: Montclair Art Museum (2006); University of Wyoming Art Museum (2006), the Tampa Museum of Art (2004), Miami Art Museum (2001), Bronx Museum of the Arts (2001) and the Museum of Modern Art, New York (1998).
www.alexanderandbonin.com