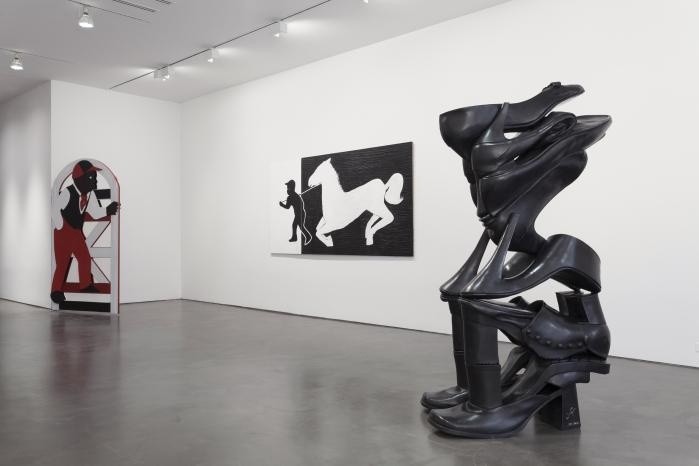 Alexander and Bonin is pleased to announce If wishes were horses...an exhibition of new works by Willie Cole. For this exhibition, Cole has created three large paintings and two sculptures signaling a significant shift in the scale of his work.

These works demonstrate Cole’scontinued interest in the Yoruba religion and, in particular, the Orisa: Yoruba deities which represent specific forces of nature and govern different parts of the universe.

Central to the exhibition isthe 6 foot high bronze The Sole Sitter, 2013. Using women's high-heeled shoes enlarged many times, the artist has created a crouched figure in a position of longing or contemplation effectively personifying ‘the wisher’ alluded to in the title of this exhibition.

Since 1995, when he created the room-sized installation The Elegba Principle,Cole has chosen to focus on one particular deity, Elegba, and to continue the codification and mutation of this figure’s physical representation in his work. Customarily rendered in black, red or white, Elegba is the messenger between god and mankind, the god who safeguards the principle of free will and the gatekeeper who represents choices and decisions. The lawn jockey, which the artist also views as a covert signifier for Elegba in post-civil war/pre-civil rights America has appeared in different forms through-out the artist’s career. For this exhibition the artist has created two slatted wooden frames representing window shutters; theysupport two carved jockeys painted in red, black and white. The painting Special Delivery, 2013 shows the jockey as the messenger delivering the horse to the rider.
The work is flanked with wooden doors reinforcing the role of Elegba as owner of roads and
doorways.

Willie Cole has long used everyday domestic objects and discarded materials to reference historical events and people. Using approximately 2,000 plastic water bottles lined with red acetate the artist has created a 7 foot tall, Chandelier, 2013. Engaging in notions of 'upcycling' and transformation, the suspended chandelier can be seen as a ‘spirit light.’

Willie Cole was born in Somerville, NJ and studied atthe School of Visual Arts and the Art Students League in New York. He lives and works in New Jersey. His work has been the subject of several oneperson museum exhibitions: The Schneider Museum at Southern Oregon University (2013), Montclair Art Museum (2006); University of Wyoming Art Museum (2006), the Tampa Museum of Art (2004), Miami Art Museum (2001), Bronx Museum of the Arts (2001) and the Museum of Modern Art, New York (1998). In January 2013, Complex Conversations: Willie Cole Sculptures and Wall Worksopened at Albertine Monroe-Brown Gallery at Western Michigan University and travels through 2014. This past spring, Cole's chandeliers were shown at the ProspectStreet Fire House in Newark, and in 2014, will also be included in the First International Biennal of Contemporary Art in Cartagena, Colombia.
www.alexanderandbonin.com