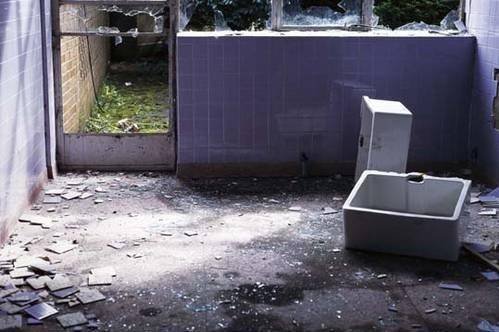 An exhibition of two new single-channel video installations by Willie Doherty will open January 6th at Alexander and Bonin.

Since the mid 1990's, Willie Doherty has produced video installations that have consistently addressed problems of representation, territoriality and surveillance as well as the politics and rhetoric of identity, especially in his native Northern Ireland. In his video installations the precarious relationship between subject and place is figured in his choice of mises en scène, which are not so much ‘places’ as ‘non-places.’ Doherty examines the interstitial, transient or uninhabitable spaces of a city and its environs, such as the anonymous, dimly-lit street corner or roadside, the derelict buildings of urban decline, or the wasteland that marks the indeterminate boundary between ‘culture’ and ‘nature’: the bridge or tunnel. If ‘places’ are defined, well-lit zones in which everyday social relations and actions are performed, ‘non-places’ are shadowy spaces of ambiguity and uncertain boundaries, of clandestine acts that perennially threaten the stable and durable identity of the place of sociality. The works presented in this exhibition extend this concern with ‘place’ and ‘non-place’

PASSAGE is a single-channel video installation shot at night in the waste ground bordering a highway. In this place of transition and uncertainty two young men walk toward each other from opposite directions. They appear to be unaware of each other until they reach a point where they meet in an underpass. As they cross paths, each looks back over his shoulder at the other. This moment of recognition or tension is repeated as the two figures meet again and again in a sequence of cuts that shift from one figure to the other and confuse expectations of any potential narrative closure.

EMPTY, the second video installation, records the exterior of a disused office building. The camera scrutinizes the external surfaces of this strange but familiar utilitarian building from dawn to dusk throughout the course of a single day. The building appears to be recently disused. Its abandonment is revealed by glimpses of dusty interiors and by the peeling blue paint that covers its entire surface. The stillness of the edifice is interrupted by the shifts that accompany the transition from dark to light and from rain to sunshine and the imperceptible, but at times dramatic changes that animate the blue skin of the building. The empty shell resonates to the soundtrack of layered ambient sounds that refer to the immediate surroundings and evoke echoes of past stories and events.

Willie Doherty was born in Derry, Northern Ireland in 1959 and continues to live and work in that city. Seven of his video installations (from 1993 to 2006) are currently the subject of a traveling survey exhibition organized by Laboratorio Arte Alameda in Mexico City. Over the past four years, Doherty’s work has been shown at the São Paulo, Istanbul and Venice Biennials. He has had solo shows recently in Zürich, Dublin, Berlin, and Madrid. In June 2006, he will represent Northern Ireland in a one-person exhibition at the Venice Biennale.

For photographs or further information, please contact Ariel Phillips at 212 367 7474 or
ap@alexanderandbonin.com.