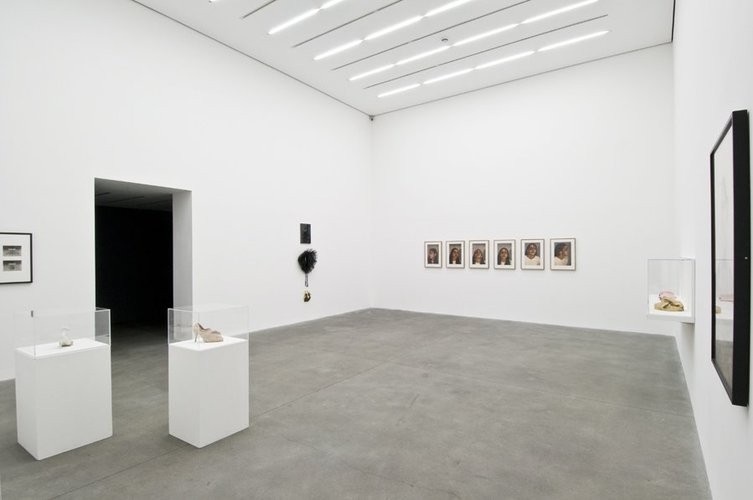 The early 1970s saw Birgit Jürgenssen (1949-2003), Ana Mendieta (1948-85) and Hannah Wilke (1940 - 1993) shaping their distinctive artistic languages in Vienna, Iowa and New York respectively. And while each artist developed independently, they shared the same concern of creating works that are intractably bound to their own bodies. At a time when feminist activism and the sexual revolution saw political engagement and fundamental questions about art's relevance sweep across Europe and America, each chose the most resonant approach to confronting the pains and pleasures of contemporary female experience: using their own physical identities as their primary medium. Echoing Wilke's 1975 statement, 'I become my art, my art becomes me', this exhibition brings together rare and unseen works in new conversations which reiterate that, despite their untimely deaths, Jürgenssen, Mendieta and Wilke, now represent three of the most radical and enduring female voices of late twentieth-century practice.

The exhibition's title 'Body I Am' is from the opening stanza of a poem Ana Mendieta wrote in 1981. In Untitled (Self Portrait with Blood), (1973), Mendieta splattered her face and upper torso in blood for a series of six photographic self-portraits. Her desire to explore violence against women had been triggered in part by a rape and murder case during her time at the University of Iowa, but in this series she is anything but a victim: defiant, engaged and wholly addressing the viewer's gaze. In the second space of the gallery, the films Mirage, and Mirage 1, (both 1974) are being seen together for the first time. in a scene befitting the idyllic imagery associated with expectant mothers in the mid-'70s, a naked, apparently pregnant Mendieta sits on the edge of a sunny Iowan field staring at her reflection in a mirror. She suddenly reaches for a long knife and slices into what we then realize is a prosthetic belly, ritually removing handfuls of white feathers from 'within her' and placing them on the long grass. Each film has a different intensity and level of violence but, however shocking their narrative, in both films Mendieta's composure, control and symbolic ownership of her body sits powerfully with her fascination with Santeria, the Cuban and West African system of beliefs, revisiting pagan rituals and ceremonies.

Birgit Jürgenssen's Polaroid self portraits (1978-79) are both ritualistic, in this case through the artist painting her skin, then tying animal skulls to her forehead or looming from behind a death-mask cast from her own face and painted with skeletal features. In this group Jürgenssen dwelt not only on the notion of the 'beautiful corpse' but the idea in Austrian culture of 'Frau Welt', the personification of the idea of 'woman', whom patriarchal folklore viewed as being both fearful of death and a source of fatal disease. As alluring self-fetishised 'woman', Jürgenssen is both critiquing and counter-examining these destructive stereotypes, and those of occidental pictorial traditions. She takes this fetishisation further with two coloured-pencil anatomical studies in which parts of her body are reformed: in Backbone Alteration, (1974) her arched spine is broken into two columns, tearing her skin up the length of her torso, while in Muscle Shoe (1976) her foot ligaments have become attached to a high heel and sole and become the shoe itself. In an adjacent porcelain sculpture, the foot has grown a spiked heel, while its toes try to squeeze into a crocheted gold glove. Nearby in Pregnancy Shoe, a worn stained pink silk sculpture of a shoe includes a silk fetal form instead of a decorative buckle.

A key component of this exhibition is a group of terracotta sculptures from the late '60s and early '70s. They represent the genesis of the central sculptural innovation of Hannah Wilke's (1940-93) early practice: a formal language which centred on the 'gestural fold' creating a form evocative of vaginal imagery but also one alluding to vessels or flowers. These rare, early examples show how Wilke strove to create pieces that were not merely representations of female genitalia, but compellingly, unapologetically beautiful sculptures in their own right. When Wilke spoke about her work being manifest in terms of 'living sculpture', presenting herself as both subject and object, she referred to all the media she explored, including drawing, performance, film and photography. She employs her wry Duchampian humour in two further works in the exhibition, which take text pieces by her male artist contemporaries as their premise. In Period (1991), Wilke draws a number of her iconic vulva emblems across four Ed Ruscha postcards, shifting the intention of the word from punctuation to menstruation. So Help Me Hannah: What Does This Represent / What Do You Represent (pink) (1978) cites the original quotes from Ad Reinhardt's celebrated 1947 cartoon. But instead of merely adding another riff to his layered humour, Wilke subverts his words by printing them across an image of herself in the corner of a room, wearing nothing but high heels, with her legs spread, holding a whistle and surrounded by toy guns, Mickey Mouse dolls and other symbolic detritus. Her direct stare demanding you answer what have now become her questions, points a finger more powerfully than the painting in Reinhardt's cartoon ever could.

Ana Mendieta (b. Havana, 1948; d. New York, 1985) is the subject of two substantial solo exhibitions this year: Ana Mendieta. She Got Love, Castello di Rivoli, Turin (30 January - 5 May) and a retrospective at the Hayward Gallery, London from September 2013. Here work is also included in the group show A Bigger Splash: Painting After Performance at Tate Modern, London (until 1 April 2013).

Hannah Wilke (b. New York, 1940; d. Houston, 1993) work was recently included in Tracing the Century: Drawing as a Catalyst for Change, Tate Liverpool and Elles at the Seattle Art Museum travelling from Centre Pompidou, Paris. Hannah Wilke will be included in Glam! The Performance of Style which runs from 8 February - 12 May at Tate, Liverpool.
www.alisonjacquesgallery.com