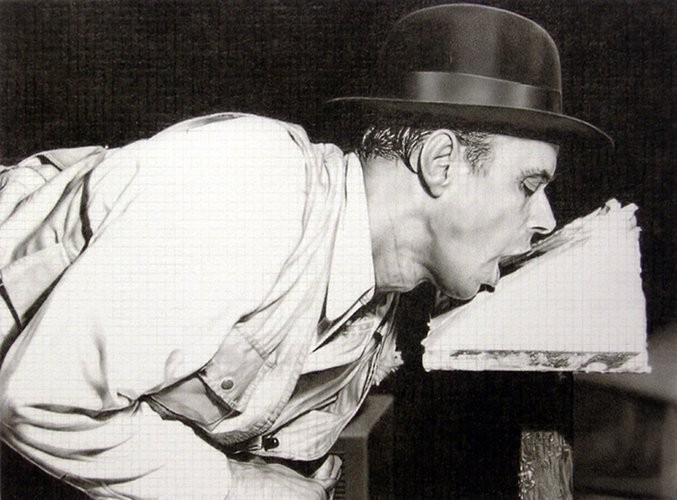 The drawings of Dan Fischer, meticulous graphite-on-paper recreations of widely known images of artists and their work from the mid-twentieth century to the present day, are remarkably simple propositions that ask some of the most complex and profound questions about art and contemporary visual culture. Whether based on iconic portraits of acclaimed artists, such as the photograph of Bridget Riley in the mid-1960s by John Goldblatt, or instantly recognisable images of an iconic artwork itself, such as Kurt Schwitters' The Merzbau and Louise Bourgeois' Germinal, each drawing by Fischer takes a photographic image with unmistakable currency, circulation and meaning within narratives of contemporary art history, and refashions it as an object of art.

Since the 1970s onwards, a potent trend in thinking about and making contemporary art has been to steadily erode various mythologies surrounding the unique and rarefied status of the artwork, and the solitary genius of its maker. Taking their cue from theorists such as Walter Benjamin and Roland Barthes, a generation of artists, such as Cindy Sherman, Richard Prince and Sherrie Levine, took the ease by which images are proliferated, edited and transformed in an age of mass reproduction as both a subject and tactic to ask questions about what art is and could be in era of such visual assault. Fischer's practice both colludes with and critiques this avenue of contemporary artistic enquiry. The artist acknowledges images' promiscuity through the act of exactly re-enacting already famous photographs in an aesthetic that Fischer terms 'Xerox realism', a technically astonishing technique that suggests the tonality of a photocopy. However, the intricacy of the drawings and the remarkable care that has gone into their compositions invests the work with an almost devotional aspect, and the artist is as likely to speak of 'admiration' as 'appropriation' of source imagery in his work.

Moreover, Fischer's unswerving commitment to focussing his practice on major figures of twentieth-century and contemporary art suggests a fascination and reverence for a great tradition of the modern and post-modern avant-gardes. Gerhard Richter in his studio standing before one of his mid-1960s nudes; an aging Duchamp looking through the shattered surface of his revolutionary 1915-23 work The Large Glass; Yves Klein orchestrating his Anthropométry of the Blue Period; the visages of German Expressionist Max Beckmann and Italian-Argentine Arte Povera artist Lucio Fontana: each of these and others gathered in the exhibition represents an episode of the canonisation of art history that is both celebrated and subverted in Fischer's practice.