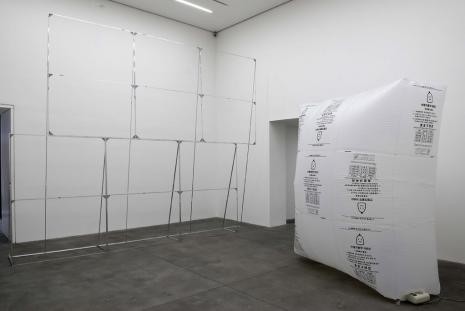 “Kiaer often draws from the history of landscape painting and from models of utopian and radical architecture, revealing ways in which they impact on the paradigms of aesthetic contemplation. Vision – the changing models of seeing and being seen, and the underlying philosophical and ideological models of self-imagining and control – could be said to permeate all of Kiaer’s work, subtly informing his choice of subject matter and installation.’ Christian Rattemeyer, Parkett, 2007”

Alison Jacques Gallery, London is pleased to announce a solo show of new work by British artist Ian Kiaer. In this exhibition Kiaer will present an installation relating to his ongoing research into the Ulchiro market district in Seoul, South Korea. Kiaer creates complex and fragile installations, typically on a miniature scale, where he groups architectural models, untouched or slightly modified found objects and two-dimensional work to create fragmented narratives.

In recent years, through a process of generic modernism, the district of Ulchiro has changed dramatically. Rather than following the processes of conventional city planning, one block after another has been built with contingency, responding both to the tension of an urgent need for space and the existing buildings. The result is a complex form of growth containing living, eating and commercial spaces.

Part of his Endless House project, Kiaer’s new installation functions both as a study and a proposal for the district and comprises fragmentary models, drawings and objects. In each case the artist is interested in how the fabric of the street is built up from a mixture of human need, architectural prescription and a form of improvisation that occurs naturally over time. Evoking the fabric of the street, the different elements could be considered as remnants from his experience.

Kiaer previously exhibited a selection of works from this project in the group exhibition The Street: Behind The Cliché, at the Witte de With Centre of Contemporary Art, Rotterdam 2006. His Ulchiro proposal included a model that proposed a structure derived from a Korean Manga cartoon as a narrative solution to an architectural problem. A watercolour deriving from street signs announced such amenities as cosmetics, money lending, or karaoke while retaining its autonomy as a poster. Elsewhere, a polystyrene fishbox provided a fictional scale for the other models while simultaneously remaining as a piece of discarded packaging resting on a curb.

Kiaer’s previous and ongoing projects have responded to the buildings and proposals of visionary architects including Moshe Safdie, Frederick Kiesler, Archigram, and Lacaton & Vassall.
www.alisonjacquesgallery.com