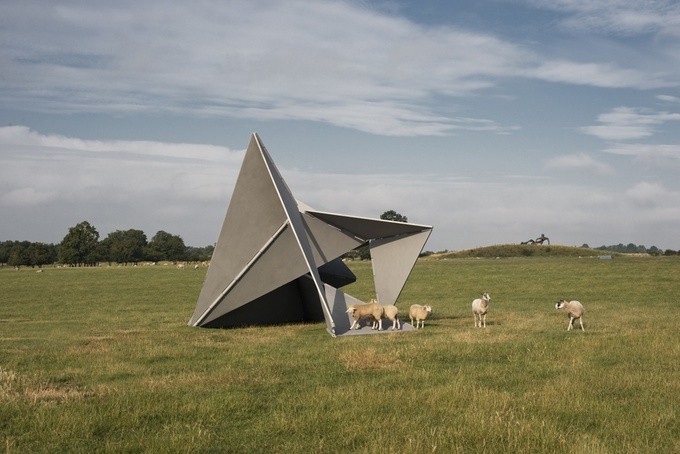 Lygia Clark (1920-1988) has been a central figure in Brazilian culture since the 1950s. Her career followed a radical trajectory from abstract geometric work on canvas and paper to participatory works and experiential installations. During the early 1960s, Clark abandoned painting and collage in favour of interactive sculptures, including the Bichos [Creatures]. These sculptures, made from hinged aluminium plates and which can be arranged in a variety of configurations, were designed to be played with by the viewer. These works were a natural evolution from Clark's abstract two-dimensional works (where she focused on breaking out of the frame and creating an organic line) into three-dimensional sculptures such as the Bicho or Trepante [Climber or Grub] series from 1960 onwards.

"I gave the name Bichos to my works of this period, because their characteristics are fundamentally organic. Furthermore, the hinge between the planes reminds me of a backbone. The arrangements of metal plates determine the positions of the Bicho, which at first sight seem unlimited. When asked how many moves a Bicho can make, I reply, "I don't know, you don't know, but it knows". The Bichos don't have a back. Each Bicho is an organic entity that fully reveals itself within its inner time of expression. It has an affinity with the shell and shellfish. It is a living organism, a work essentially active. A full integration, existential, is established between it and us."
- Lygia Clark, 1960

Clark's process of making the Bichos began in her studio, with plotting the coordinates onto a balsa wood study before executing them in the form of a three-dimensional aluminum maquette. A fabricator would then be given instructions to make the Bichos using a particular material to a specific size. Lygia Clark would make different sizes of the same type of Bicho, small, medium and large, and intended them to multiply as editions of up to five works at a time to go forth and inhabit the world at large.

From very early on, Clark was interested in architecture. In 1955, the artist made a series of painted wooden maquettes for interiors; small rooms with doors which move and coloured interiors which directly relate to her paintings, but here are transformed into whole rooms. 1955 was also the year Clark made her first maquette entitled Construa você Mesmo seu Espaco de Viver [Build your own Living Space], in 1960 she made an additional maquette for the same project. In this work, Clark envisaged a large modernist building in which the inhabitant or visitor could slide the walls into different configurations and create living spaces depending on mood or preference.

In 1964, Clark made a further maquette for a small white building called A Casa do Poeta [The Poet's House]. While neither house was ever built, the maquettes remain as a reminder of the artist's intention to see the works fully realized one day. In the same year, Clark made a series of intricate, handmade matchbox structures entitled Estruturas de Caixas de Fósforos [Matchbox Structures]. As a heavy smoker, she collected and glued different empty matchboxes together and painted them a variety of colours. Some are entirely monochromatic; black, red, white, gold or silver; while other matchboxes have different colour interior 'drawers'. This series of no more than twenty works resembles a group of models for imaginary modernist buildings. The matchboxes could be picked up and played with, creating different configurations depending on which way the viewer pushed the sliding 'drawers'.

The Fantastic Architecture series of Bicho maquettes made by Clark's own hand in 1963, show her ambition for monumental scale sculptures. The artist's dream was for this project to be wholly immersive; inviting the viewer to enter the work and allowing them to weave their way in and out of its architecture.

Impossible in her own lifetime, The Lygia Clark Estate in partnership with Alison Jacques Gallery, London was able to realize the first Fantastic Architecture sculpture in 2013. A year long process of working alongside Price Myers and MTEC, both of who have been involved in large scale outdoor work by major British sculptors such as Richard Wilson and Anish Kapoor. The resulting Lygia Clark steel sculpture weighs around fifteen tons when installed, with hinges that allow for numerous configurations. Fantastic Architecture 1 is a living sculpture that evolves and changes depending on where the work is installed and who is installing it. At the Henry Moore Foundation in Perry Green, it provides a shelter for nearby sheep and resembles a huge creature in the landscape with seminal works by Moore including Large Reclining Figure (1984) and Sheep Place (1971-72), and Richard Deacon's Associate (2014) in view nearby.

The installation of Fantastic Architecture 1 is a joint-collaboration between the Henry Moore Foundation, Perry Green and the Henry Moore Institute, Leeds with O Mundo de Lygia Clark-Associação Cultural, Rio de Janeiro and Alison Jacques Gallery, London. With thanks to Price & Myers and MTEC.

Alongside Fantastic Architecture 1 at The Henry Moore Foundation, Perry Green, Lygia Clark: Organic Planes curated by Lisa Le Feuvre will be on view at the Henry Moore Institute, Leeds from 24 September 2014 until 4 January 2015.

Lygia Clark currently has a major retrospective on view at the Museum of Modern Art, New York curated by Connie Butler and Luis-Perez Oramas, on view until 24 August 2014.
www.alisonjacquesgallery.com