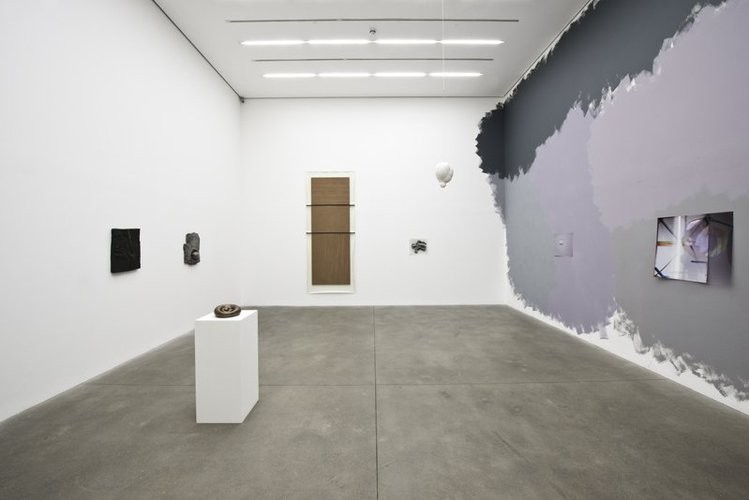 'Whenever we are trying to recover a recollection, to call up some period of our history, we become conscious of an act sui generis by which we detach ourselves from the present in order to replace ourselves, first, in the past in general, then, in a certain region of the past - a work of adjustment like the focusing of a camera. But our recollection still remains virtual...'
- Henri Bergson, Matter and Memory, 1896

Alison Jacques Gallery is pleased to present Matter & Memory, a group exhibition of seven artists exploring the self-reflexive process of perception. Including work from the 1960s to present, the exhibition addresses an object's relationship to the environment in which it was produced, the performative process by which this production took place, but also the subjectivity which simultaneously enables and prohibits us from seeing it.

Charlotte Posenenske was among the leaders of German minimalism. Known for her experimentations with space, Posenenske rejected the idea of art as an autonomous practice, maintaining the belief that art should be public, participatory and accessible. The series Vierkantrohre Serie D (Square Tubes, Series D), 1967 resemble steel ventilation shafts, and were conceived by the artist as modules that could be combined in endless variations to adapt to the surrounding environment. Similarly, Relief Serie B, 1967, works were made to be shown in various formats, according to the space they occupy. Inherently self-reflexive, Posenenske's work from this series embodies her belief that artworks 'should not represent anything but what they are'. Also site-specific in nature, British artist Philomene Pirecki's wall based installations employ painting, photography and drawing and question the idea of an original or definitive artwork and the contingent nature of perception and forms of reproduction, with the artist often using previous works within subsequent work or to generate new iterations within a particular series. In this exhibition Pirecki will paint the gallery walls to create a 'White Wall' using custom-mixed paints derived from various translations of photographs of the gallery walls taken by the artist in daylight and artificial light. Repetition is also an essential component in the work of German-born Italian artist Irma Blank. Blank is interested in the structure of writing and refers to her work (Eigenschriften from the early 1970s and Avant-testo works made in 2000/2001) as non-verbal writing which articulate an original, inclusive truth. She creates a space, or 'mirror' that allows readers to project their own text onto the work. Blank explains, 'Writing is generating. Writing is also perceiving the passing of time through one's fingers, hand, body. The time of writing is the time of life; the time of the person writing...writing becomes image, a manifestation of being, of being there, in the absolute without form. An open text. A text for all.'

The American artist N. Dash carries small pieces of cloth with her at all times, working them with her hands until the point in which the material can no longer withstand any further touch. She then photographs them and archives the handled cloth. The results are displayed in silver-gelatin prints that solidify and monumentalize this sculptural, performative activity. The action of handling the cloth also serves to instigate ideas for large paintings - sculptural, wall-mounted works composed with adobe, fabric and paint. British artist Helen Barff also lives with objects for an extended period of time before she begins to work with them, yet unlike N. Dash who imbeds her own history into her cloth sculptures, Barff's interest lies primarily with how a form is shaped by a previous history. The artist attributes her predilection for hand-sized objects (Handgröße) to her interest in Martin Heidegger, describing her works as 'anthropomorphic metaphors that present a philosophical position on human presence.' In this exhibition Barff will include small stones and objects collected from the River Thames which she covered with felt, masking the objects' surfaces and colours while simultaneously heightening other properties that might have previously gone overlooked.

Czech artist Maria Bartuszová is known for her expression of 'the abstract in the concrete' and her ability to delicately balance animate with inanimate form. Her fragile plaster work often depicts a state of constant expansion while in turn her bronze sculptures seem to revert into themselves. Inspired by natural and elementary forms, Bartuszová's work is caught between states of destruction and formation, stability and fragility. Charlotte Posenenske and Maria Bartuszová were both included in 'Documenta 12', 2007, a seminal exhibition curated by Ruth Noack which instigated an overwhelmingly positive response for both artists. Erika Verzutti lives and works in São Paulo, and the material properties of her sculptures directly recall the 20th-century Brazilian Neo-Concretist movement. Much like Bartuszová, she is interested in the formal qualities of organic forms, yet her interest lies in articulating or emphasizing the symbolic power of a common object (an egg, a flower, a piece of fruit) and how abstract, geometric modifications to these organic forms alter our perception of nature. Verzutti fluctuates between materiality and absence, and between social structures and formal structures. The works included in the exhibition possess a timeless quality - at once contemporary and prehistoric; hollow indentations in her concrete sculptures allude to a previous history, memory or presence.
www.alisonjacquesgallery.com