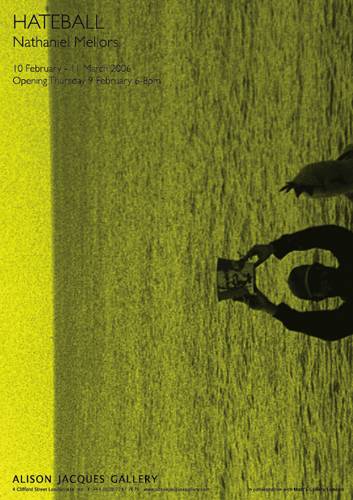 Alison Jacques Gallery is pleased to present HATEBALL, a new installation by Nathaniel Mellors of 16mm film, video, sculpture and drawing.
HATEBALL begins with the late observations of a senile Eastern European supercomputer projected at the entrance to the exhibition (Brain One), and finishes in the back space of the gallery with a re-staging of the final scene from Sylvester Stallone’s original Rambo movie ‘First Blood’ (First Blood No. Six).
In the central gallery Mellors will present MACGOOHANSOC; a party-political broadcast in freefall. In this film a 7-foot tall woman claiming to be possessed by the ghost of not-yet-dead ‘Prisoner’ star Patrick McGoohan spouts an increasingly fascistic dictum. She is flanked by piped brown blazer-wearing supporters, who flicker between bored and zealous support. The film is ‘policed’ by a series of sculptures whose primary weapon is a very precise form of confusion.
In HATEBALL Mellors explores the point at which languages, whether written, filmic or sculptural, begin to break down and function in a different ways. Mellors works against any singular style by colliding different languages semi-combatively, generating his own strange languages, or through the considered application of incongruous elements or unlikely materials to a visual or textual style. In several works have the introduction and application of breakfast cereal as a sculptural motif. In the film ‘The Geometry of Hate’ a poem against neo-modernist art is ‘read’ by Japanese noise-musician DJ Scotch Egg. This is followed by his live mis-interpretation / re-rapping of ‘Who Makes The Nazis?’ by The Fall.
The viewer is confronted with large doses of sensory information which at points appear incoherent or to be undermining their own reading. There is a permanent spillage of light and sound between different works. Still, there is a considered logic to the relationships in Mellors’ polyphonic universe, although he seems to be systematically undermining all escape routes to reasonable solutions with sardonic delight.
Nathaniel Mellors was born in Doncaster (1974) and lives and works in London. In 2001 he graduated from the Royal College of Art. Recent solo exhibitions include Collective Gallery, Edinburgh (2005), Galerie Fons Welters, Amsterdam (2005) and Matt’s Gallery, London (2004). Group exhibitions include Offside, The Hugh Lane Gallery, Dublin (2005), Romantic Detachment, PS1, New York (2004) and We’ll Meet You In The Lobby, Londra Hotel, Istanbul Biennial, Istanbul (2003). Nathaniel Mellors is jointly represented by Alison Jacques Gallery, London and Matt’s Gallery, London.
Nathaniel Mellors plays in Skill 7 Stamina 12 with Dan Fox, Ashley Marlowe and Maaike Schoorel. The group are currently working on their 2nd album provisionally titled SKILL 7 STAMINA DEAD. www.junioraspirin.com
Special thanks to the performers of Hateball: Johnny Vivash, Hannah Rickards, Gwendoline Christie, Dan Fox, Holly Walsh, Ashley Marlowe, DJ Scotch Egg and also to the The Collective, Edinburgh and Matt’s Gallery, London for their assistance in the realisation of this work.