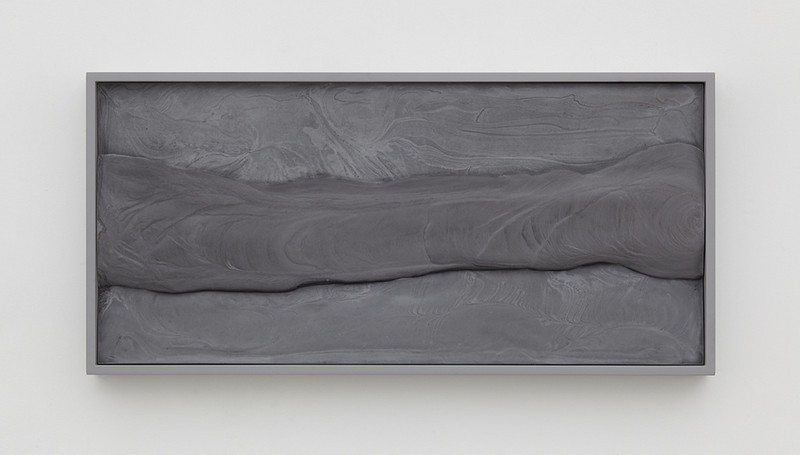 The ceramics of William J. O’Brien are naturally formed, brilliantly coloured, and contain a wide range of references — ethnographic, historical, poetic, and spiritual. A carefully balanced exercise in improvisation and discipline, which the artist explains as capturing ‘the point where ugliness and failure can become attractiveness.’ Erika Verzutti alsouses a variety of cultural references as she combines opposing formal and social structures such as the natural and artificial in a uniquely complex form. In Turtle and Sand (2015) bronze eggs are inserted into the dents of a turtle’s papier-mâché back, which is in turn supported by four beautifully coloured geode feet. A similar aesthetic sensation is conveyed in Jeu de galets (1967) by Alina Szapocznikow in which polished bronze stones fit neatly into a larger bronze tablet. Originally produced in 1967 for a show curated by art historian Ceres Franco, the work was based on the idea of ‘the game’, and stones from the UNESCO Japanese garden in Paris served as inspiration. These stones simultaneously referenced the artist’s cancerous growths as she was battling cancer at the time. Anthony Pearson’s cast bronze wall-based sculpture Untitled (Tablet) (2012-2015) was created using moulds made from hand-sculpted clay forms. Although the sculpture itself resembles a spinal chord or bundle of sticks, the richly patinated surface also references Pearson’s ongoing interest in photography and abstraction as it relates to light. Camille Blatrix’s carved sculpture An other little friend (2015) is described by the artist as ‘a ray of light’. Traveling through space whilst carrying a message, it is a hybrid between a frozen sculptural form and a technical object waiting to be activated, neither flower nor remote control.

Maria Bartuszová’s inspiration lies in the natural references which inform her work (melting snow, trees, wheat grain, eggs) and the transitory and impermanent nature of these sources, articulated in her plaster works. From the 1980s pure elliptical forms, hollowed eggs and shells were prevalent in her work, often suggesting fragility as well as deformity. Folded Relief X (1986) is one of the few hand painted plaster works made by Bartuszova in her lifetime. Paolo Icaro’s works also employ white plaster, yet instead of referencing natural forms, they respond to architecture and organically emerge from the space they occupy. Both Window Show (1974) and Fregio (1982) are within the context of 1970s Minimalism, subtly investigating their surroundings. Fernanda Gomes also references architecture around her and the poetics of the immaterial as her works articulate the space in a poignantly subtle way. Through Gomes' choice of materials, be they found objects or natural materials such as wood, gold and water she embodies Alberto Burri's philosophy of 'truth to materials' exemplified in the Arte Povera movement to which Pier Paolo Calzolari is often linked. Calzolari’s sculpture exudes stillness, articulating an appreciation of the ephemeral. Untitled (1988), is made of salt, lead, a refrigeration unit and motor. As the day goes on a coating of frost builds on the objects' surface, melting through the course of each day and marking the passage of time through metamorphosis.

Originally established as a printmaker, Zarina Hashmi’s earliest works reflect her concentration in the traditional medium of printmaking as well as her dedication to geometry and abstraction. In the 1980s she began making cast paper sculptures; Wall I (1979-2009) and Untitled (1980-2009) which incorporate gold leaf – a material that permeates her work and references the presence of the divine. Also included in the exhibition is Tasbih (2012) a set of exquisite green onyx prayer beads realised on a monumental scale. The foundation of Takuro Kuwata’s work is also rooted in tradition. Using the Japanese Kairagi technique Kuwata transforms the ancient medium by adding stones to his clay mix. As the stones puncture and burst through the clay when fired, the result is a shrunken, crackled glaze which surrounds the pots or oblong forms. Often Kuwata adds powdered gold to the glaze which causes spikes of the metallic substrate to pierce through the surface. Sheila Hicks trained in the modernistic Bauhaus tradition and mixes autonomous art with the traditional craft of weaving. Included in this exhibition is Dancing With One Eye Open (2015) a new work from the minimes (small studies) series which she has made continuously over five decades. In this particular work Hicks employs white linen thread to create an intimately beautiful geometry of snaking white cords.

In Janine Antoni’s to twine (2014) two human spines intertwine like snakes on a woven rug, meticulously cast in polyurethane resin. The embrace they seek is one that transcends sex, stronger and closer than any possible human connection. The spines appear to be fusing, as head and tail are inverted and the two sacrums meet. Antoni uses form to create a metaphor with a transformative gesture that links to the work of Hannah Wilke. Wilke’s practice focused on the folded gesture, a motif evocative of vaginal imagery which afforded repeated opportunities to explore her interests in both the materiality of sculpture and the making of feminist art. These gestures began with terracotta sculpture in the 1960s including Yellow Rose of Texas (1970).

Lygia Clark firmly believed that art had to engage the viewer with more intimacy and totality than traditional conceptions of painting, and indeed sculpture, allowed. Extending her powerful sensitivity to the impact of art on spectators/participants Clark developed an innovative denial of the passive engagement between the perceiving subject and the perceived object, and so made things that were meant to be touched, twisted, worn and weathered. The Bicho sculptures of the 1960s are her most iconic of works, representing early experiments with abstraction literally coming off the wall and landing in the hands of viewer. As Clark wrote in 1960, these works were called ‘critters’ due to their fundamentally organic character.

Janine Antoni (American b. 1964) recently exhibited in At the Hub of Things at the Hirshhorn Museum, Washington D.C., and Crossing Brooklyn at the Brooklyn Museum, New York. In 2014, she has a solo show at the Mattress Factory in Pittsburg. She currently has two solo shows in the USA: Luhring Augustine, New York and Anthony Meier, San Francisco which run until the end of April 2015. Antoni is currently featured in the March issue of Modern Painters with an interview by Wendy Vogel. Her work is included in many museums and foundations: MoMA, NY; The Whitney, NY; The Art Institute of Chicago; Sammlung Goetz, Munich; and Astrup Fearnley, Oslo. Antoni’s last exhibition in London was in 1994 at Anthony d’Offay, London.

Maria Bartuszova (Czech b. 1936; d. 1996) was recently the subject of a retrospective at the Museum of Modern Art, Warsaw with an Art Forum review published in Feburary 2015 issue. Forthcoming museums shows include The National Gallery, Prague. Public collections and foundations which own work include Centre Pompidou, Paris; and Sammlung Goetz, Munich.

Camille Blatrix (French, b. 1984) is the 16th Ricard Foundation Prize Winner. His work was recently included in Puddle, pothole, portal at the Sculpture Center, New York.

Pier Paolo Calzolari (Italian b.1943) has been included in major exhibitions worldwide including Documenta, Venice Biennale, his work is included in many museums and foundations: MoMA, NY; The Whitney, NY; The Art Institute of Chicago; Reina Sofia, Madrid; and Castello di Rivoli Italy. Calzolari was in the original 1969 When Attitudes Become Form at Kunsthalle Bern curated by Harold Szeeman, and the repeat show in 2013 curated by Germano Celant with Thomas Demand and Rem Koolhaas.

Lygia Clark (Brazilian b. 1920; d. 1988) had a major retrospective at the Museum of Modern Art, New York in May 2014. In 2015 in the UK, her work was showcased in a solo project Organic Planes at the Henry Moore Institute, Leeds included in group exhibitions at the Hayward Gallery, London; the Fruitmarket Gallery, Edinburgh and the Whitechapel, London.

Zarina Hashmi (Indian b.1937) is included in two on-going exhibitions at the Hammer Museum, Los Angeles and the Montalvo Arts Center, Saragota. In 2012-2013, a solo show entitled Paper Like Skin curated by Allegra Pessanti was hosted by the Hammer Museum, LA and toured to the Guggenheim, NY and The Art Institute of Chicago. Public Collections & Foundations include the Metropolitan Museum of Art; the Whitney Museum, NY; SFMOMA, San Francisco; Tate, London.

Paolo Icaro (Italian b. 1936) was recently in a solo exhibition at Peep-Hole, Milan, travelling to Extra City, Antwerp. Public Collections include: Galleria Nazionale d’Arte Moderna, Rome and The Hirshhorn Museum and Sculpture Garden in Washington DC.

Erika Verzutti (Brazilian b. 1971) was recently included in the Carnegie International (2013). She will have two up-coming solo exhibitions this year, at Alison Jacques Gallery, London and the Sculpture Center, New York. Her work will also be included in 34o Panorama da Arte Brasileira at the Museu de Arte Moderna, São Paulo. Public collections include the Guggenheim, NY; Pinault Collection, France; Cisneros Foundation, Miami and Carnegie, Pittsburg.

Hannah Wilke (American b.1940; d. 1993) was recently the subject of a solo exhibition at Alison Jacques Gallery. Public collections include Centre Pompidou, Paris; Tate, London; MoMA, NY; the Whitney, NY; the Guggenheim, NY and Tel-Aviv Museum, Israel. Wilke will also be included in The Great Mother curated my Massimiliano Gioni and organized by the Trussardi Foundation at the Palazzo Reale, Milan (2015).
www.alisonjacquesgallery.com