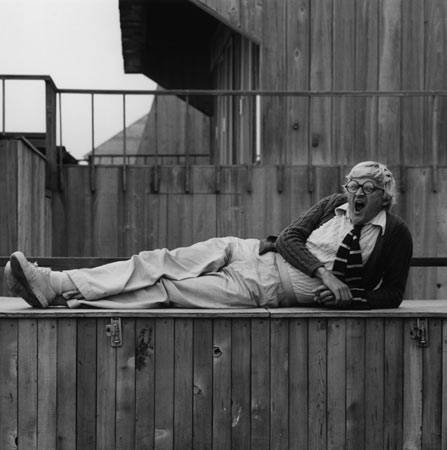 “I made a drawing of Robert and he gave me a Polaroid photograph of a male nude”.
David Hockney in conversation with Charlie Scheips, 2004.

Alison Jacques Gallery in collaboration with Charlie Scheips will present an exhibition of work by Robert Mapplethorpe curated by David Hockney. Mapplethorpe is considered one of the most important photographers of the twentieth century and this is a unique opportunity to discover his work through the eyes of another artist. The pair first met in1970 when Hockney and his assistant Mo McDermott visited Mapplethorpe who was living with the rock musician Patti Smith at the Chelsea Hotel, New York. Hockney went on to be photographed by Mapplethorpe on several occasions including the well known 1976 portrait on New York’s Fire Island with Henry Geldzahler, the renowned curator and cultural commissioner of New York in the 70s.

Highlighting Mapplethorpe's aesthetic sensibility, the controlled balance between light and shadow, balance and symmetry, beauty and obscenity; Hockney takes the viewer on a personal selection of portraits, still lives, flowers and nudes in what is a fresh and previously unseen overview of the photographer’s work to date. The show comprises of around sixty of Mapplethorpe’s photographs taken in the years 1975 – 1988. Many of the images are lesser known and some have never previously been exhibited in London.

The exhibition will feature portraits of leading creative figures in contact with both Mapplethorpe and Hockney. Portraits including artists Keith Haring, Andy Warhol, Roy Lichtenstein, Ed Ruscha, and Louise Bourgeois will be shown alongside the gay porn star Peter Berlin, writers William Burroughs and Bruce Chatwin, and the poet and rock icon Patti Smith. Hockney has also selected portraits of famous acquaintances including Richard Gere, Lord Snowdon, Yoko Ono, Arnold Schwarzenegger, Marianne Faithful and Iggy Pop as well as art world personalities. These include curator Mario Amaya, who was with Andy Warhol when he was shot in 1968; Sam Wagstaff, Mapplethorpe’s long time partner and one of the pioneering collectors of photography whose extensive collection was sold to the Getty Museum in 1984; and key art dealers such as Robert Fraser, Leo Castelli and Ileana Sonnabend.

During Mapplethorpe’s life time he had UK Museum shows at the ICA, London (1983) and the National Portrait Gallery (1988). Since his death from AIDS in 1989, museums throughout the world have made his work the subject of numerous exhibitions, including the Hayward Gallery, London (1997). The current show follows on from ‘Mapplethorpe selected by Cindy Sherman’ at Sean Kelly Gallery, New York (2003) and ‘Robert Mapplethorpe curated by Cathy Opie’ at Mark Selwyn Fine Art, Los Angeles (2004).

David Hockney recently published Hockney’s Pictures, a retrospective selection of 45 years of his work available at bookstores everywhere. Charlie Scheips, is a freelance curator, editor and cultural historian based in New York City. He writes a weekly column entitled The Art Set for newyorksocialdiary.com. He was the founding director of the Condé Nast Archive.