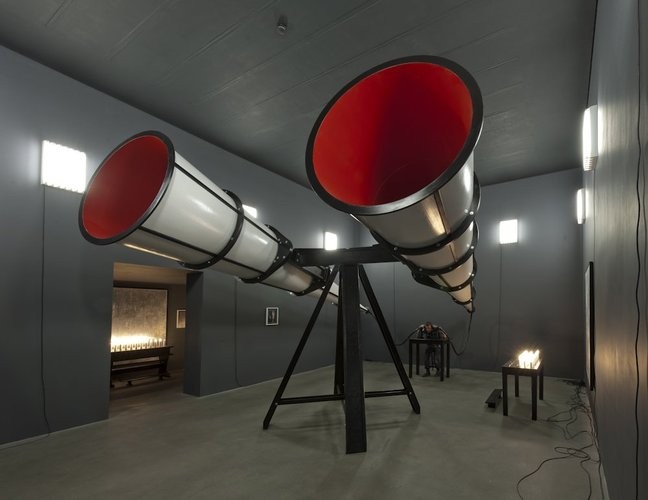 For his third solo show at Alison Jacques Gallery, Thomas Zipp has transformed the spaces into atmospheric rooms reminiscent of a place of worship, in which religious imagery and sexual motifs collide. Zipp combines a range of forms - from aluminium paintings to electric candles, oversized conical ear tubes to photographs of life-sized dolls - to transport us into his visionary world. The show and its title are premised on Sigmund Freud's 'Three Contributions to the Theory of Sex' (1920), which fixated on our need for deviations from pure connections between the sexual object and sexual aim, and which Zipp uses to navigate us through his uncanny landscape in search of strange interconnecting reference points and dialogues.
In the main gallery, Zipp has created an installation of two large conical tubes, which can be attached to each ear. The listener is encouraged to interact with this device, but with a sense of ambiguity over what's actually being heard and where that sound is from. He has created a series of large aluminium paintings showing abstracted landscape fragments and remnants of body parts, invoking dislocated sexual aberrations taking place across our fractured world. For the first time, Zipp has painted directly onto aluminium surfaces, not only marking an innovation in his visual language but also imbuing the work with an iconic, quasi-religious quality. These reflective surfaces also invite the viewer to turn their gaze back on themselves; the self, and in particular one's religious and sexual motivations, coming under close scrutiny. Each painting is paired with a sculptural element displaying electric candles, referencing areas for personal devotion and prayer within churches. Small neon lights mounted high up on the walls of the space create a sense of celestial light streaming through the building.
Zipp's use of neons and electric candles undermines the aura of spirituality normally associated with religious candles and stained glass windows; alternatively the notion of bright lights enticing us into sex shops and brothels permeates his show. This initiates a compelling dialogue with the installation in the gallery's second space, in which further aluminium painting and sculpture pairings are interspersed with a group of figurative photographs of the sort of life-sized rubber dolls made for shop windows or medical experiments. These are in a disturbing state of disrepair, reminding us of our darkest human desires to desecrate the body as an object.
In uncompromisingly addressing these two themes of religion and deviant sex, Zipp seeks to remind us of their physical, spiritual and psychological effects on the human mind. This forms an intriguing parallel with the work he created for MENS AGITAT MOLEM (Luther & The Family of Pills) at the Sammlung Goetz, Munich (2009), which dwelt on the influence of historical individuals on 'the fall of man'. In his London exhibition, we are forced to confront the sense of our being enthralled to religion and sexual behaviour leading to our demise. Zipp elucidates the aberrations inherent in both practices and proposes the possibility of a more veracious domain, in which religiosity and sexual deviance are inextricably commingled.
Thomas Zipp (Born in Heppenheim, 1966) lives and works in Berlin. Solo exhibitions include The World ́s most complete Congress of RITATIN Treatments, Kunstraum Innsbruck, Innsbruck (cat.) (2011); (WHITE REFORMATION CO-OP) MENS SANA IN CORPORE SANO, Kunsthalle Fridericianum, Kassel (cat.) (2010); MENS AGITAT MOLEM (Luther & The Family of Pills), Sammlung Goetz, Munich (cat.) (2009); PLANET CARAVAN? IS THERE LIFE AFTER DEATH? a FUTURISTIC WORLD FAIR, Museum Dhondt - Dhaenens, Deurle, Belgium (2008) and South London Gallery, London (2007); and Kunsthalle Mannheim, Museum in der Alten Post, Muehlheim, (cat.) (2007). Group exhibitions include: Gesamtkunstwerk: New Art from Germany, Saatchi Gallery, London (cat.) (2011); If Not In This Period Of Time: Contemporary German Painting 1989-2010, Museu de Arte de São Paulo Assis Chateaubriand, São Paulo (cat.) (2010); Defamation of Character, PS1, New York (2006); Rings of Saturn, Tate Modern, London (2006) and Of Mice and Men, 4th Berlin Biennale (2006).
www.alisonjacquesgallery.com