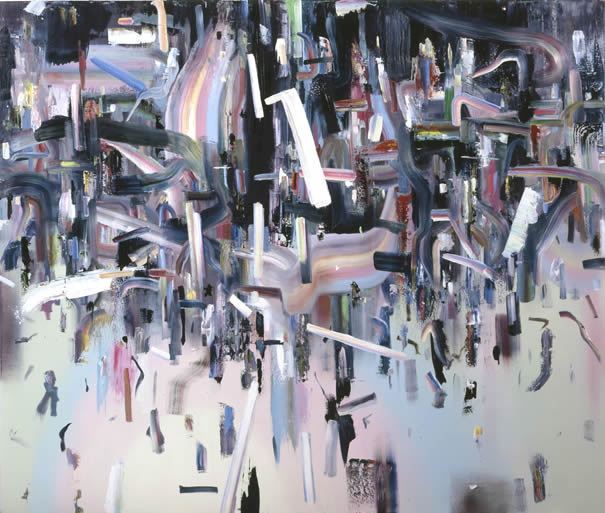 “I’m interested in a kind of apocalyptic fantasy that seems to lurk below the surface of the American psyche. It’s an association of catastrophe and disaster with redemption and transcendence. The terrible takes on an air of desirability. One of the ways I try to reference this is to imply a kind of sickly, if rapturous, delirium.”
Tomory Dodge, 2007

We are delighted to present the first European solo exhibition of American painter Tomory Dodge. For his first solo show at Alison Jacques Gallery, Dodge will present a series of new large-scale oil paintings. Dodge’s paintings take up the task of picturing a nuanced world in broad strokes. Colourful expressionistic canvasses feature vacant arid landscapes, often hinting of human existence somewhere within the un-inhabitable climate. In a series of six new paintings and a series of new works on paper, Dodge moves away from obvious narrative in his work, creating obscured images that picture complex and ambiguous environments on the verge of formal collapse.

In the painting Expanse (2007), Dodge draws on observations made during excursions into the California desert. The painting is composed of a vast network of horizontal marks, the brushwork articulating a sprawling chaos only calmed by the patchwork of pastel colours. Dodge is concerned with the complexities of the twenty first century landscape and the often apocalyptic fantasies that it inspires. The painting Tree (2007) was based in some part on a memory of an image from a heavy metal t-shirt. Here the distribution of crude black brush strokes, which at first appear to form the leaves of an idyllic tree together with other colourful marks, slowly reveal a mass of hanging skulls to sinister effect.

While some of Dodge’s imagery is drawn from observation and photographic sources much is left to imagination and memory. The large painting Israfel (2007) is composed of a shower of rainbow-coloured vertical strokes set against a fading aquamarine sky. There is a clear interest in visual phenomena. Often the paintings are informed by a cinematic understanding of image and light, with such characteristics as lens-flare and anamorphic distortions appearing in the work.

Dodge is interested in what happens when painterly and representational concerns collide. The paintings are formed by a mass of bold, fluid gestures, thickly laid on in precise dashes. These gestures have a sense of economy and intention independent of the images they constitute. Dodge's images exist on the edge of representation while often threatening to collapse into abstraction. The artist's exploration is a means of expanding an already vast vocabulary of imagery in the service of paint.