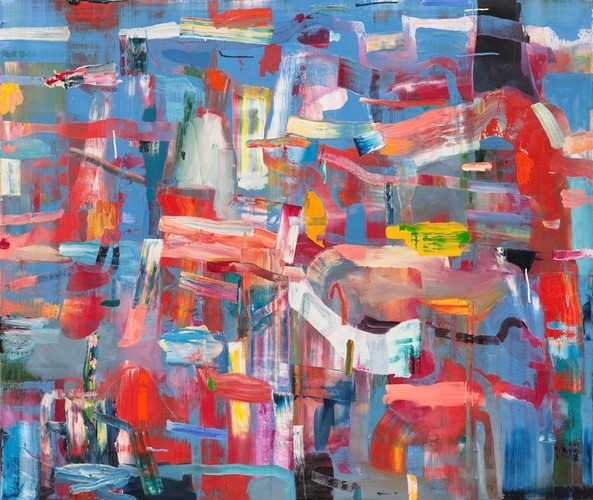 ‘There is a brilliant state of alertness in all of Dodge’s works as he navigates between analysis and release, construction and manifold intersection. In each painting, he’s on a different journey, always steering the self-referentiality of abstraction, turning it so far that it becomes an existential experience that goes beyondpainting.’
– Hans Rudolf Reust, Artforum, 2012

To create the paintings in his third solo show at Alison Jacques Gallery, Tomory Dodge instigated new processes that, whilst still rooted in abstraction, give life to what he describes as a kind of latent or ‘phantom figuration’. He’s invested in them techniques that deliberately allow each work’s imagery to reveal much more than a simple relaying of his original intentions, resulting in a richly multilayered process of ‘intentional derailing’.

Each of the new paintings ­– from large-scale diptychs to the smallest of his individual canvasses – is more the product of restrained self-disruption than an attempt to realise an initial idea. They began with a group of very simple forms, added to until Dodge thought an impasse was reached. He then covered up the entire image with a single layer of colour, which was scrapped back to give distorted, obscured glimpses of what’s underneath. The resulting pentimento was then worked into again and again, with Dodge repeating the process until the imagery reached a state he felt was as distant as reasonably possible from its origins, allowing us, through his unique alchemy, to experience these paintings as deviations from themselves.

Dodge’s layering and excavating processes are by no means mere exercises in negation and dislocation. In fact the apparently disinterested, mechanical nature of covering, and recovering, previous layers ironically injected a degree of unpredictability to each work, especially for their author. Crucially, this isn’t the same as encouraging mistakes, but rather in lieu of them. Considering Dodge finds getting those to occur at will or on cue almost impossible through the considered manner in which he works, he’s always had to employ surrogate processes to digress. If the surrogate in his earlier diptychs lay in the inherent absurdity of trying to calibrate and precisely mirror the canvas opposite, the two new large diptychs in this show, ‘Sick Boy’ and ‘Stutter’ (both 2014), see Dodge’s new layering processes overwhelm and supplant that echoing. They are vividly alive with sculptural interlacing, nuanced opaque gestures and prismatic portals, with his exquisite interplays of ‘internal illumination’ and palette creating tangible places and planes constructed from colour and light.

The ‘phantom figuration’ Dodge refers to is derived from this sense of the physical. There is a feeling here of real forms which however congealed begin to occupy actual spaces, whether across three-and-a-half metres or within the tightest confines of ‘Marine’, ‘Stack’, ‘Monument’ and ‘Pool’ (all 2014). These shapes and potential narratives remain merely hinted at rather than prescribed, and Dodge deliberately uses his titles to play with this mystery. As with even his earliest more representational works, he always tries to maintain distance between image and title, for language to have to stretch to reach what it can’t describe. So, however compelling the tangibles within these new works, Dodge will always keep a gap, that liminal space between those few reference points we think we know and all we’re being invited to experience.

Tomory Dodge (b. 1974) trained at the Rhode Island School of Design, Providence, and the California Institute of the Arts, Valencia, and lives and works in Los Angeles. His works will be included in 100 Painters of Tomorrow published by Thames & Hudson in autumn 2014; and An Appetite for Painting, The National Museum of Art, Architecture & Design, Oslo (from September 2014). Notable recent exhibitions include Directions to a Dirty Place, a two-person show with Denyse Thomasos, Southeastern Center for Contemporary Art, North Carolina (2013); To Live and Paint in LA, Torrance Art Museum, California (2012); and Library of Babel/In and Out of Place, Zabludowicz Collection, London (2010). In addition to the Zabludowicz Collection, Dodge’s works reside in the Saatchi Collection, London, Whitney Museum of American Art, New York, Los Angeles County Museum of Art, Dallas Museum of Art, Knoxville Museum of Art and the Smithsonian American Art Museum, Washington D.C.
www.alisonjacquesgallery.com