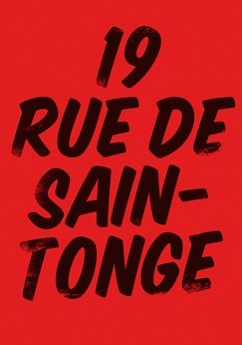 The Almine Rech Gallery is pleased to present its final exhibition in the rue de Saintonge space, which has been its home for nearly seven years. Entitled 19 rue de Saintonge, the gallery's address, this exhibition pays its respects to this venue by presenting a selection of gallery artists representative of recent years' programming.

This last exhibition, and the forthcoming change of address, is an opportunity to bring together the concepts of location, urbanism, and the cultural fabric of the city and its inhabitants.

Indeed, materials and signs of the urban vernacular are omnipresent in the exhibited works. Erik Lindman appropriates and incorporates the detritus recovered around his New York studio in his reductive works, while the stark pieces in wood and zinc by Beatrice Caracciolo refer to make-shift and temporary shelter. The collages of Aaron Curry, sourcing found images, strangely resemble graffiti; and the wall-reliefs by Mark Hagen are composed of aluminum armatures supporting polished obsidian plates - bringing together modular and organic elements onto a starkly rational three-dimensional grid.

More direct photographic work such as those by Ziad Antar, document varied architectures of the Middle East; whether booming UAE real estate developments, or sites in a more precarious state, such as the carcass of a never completed hospital in Beirut. Other direct references and representations to the city can be found in Liu Wei's wall-reliefs made from doors salvaged from public housing units in Shanghai, or Ida Tursic and Wilfried Mille misty landscape of Paris. Within these urban settings one might cross pedestrians captured by Philip-Lorca di Corcia characterized by their dramatic, almost cinematic light. And finally, we encounter the melancholic but highly structured drawing by Matthias Bitzer, the stark photographic works of Taryn Simon from her "Black Square" series, and the uncannily urban and almost nostalgic radiator sculptures by Tom Burr.
www.galeriealminerech.com