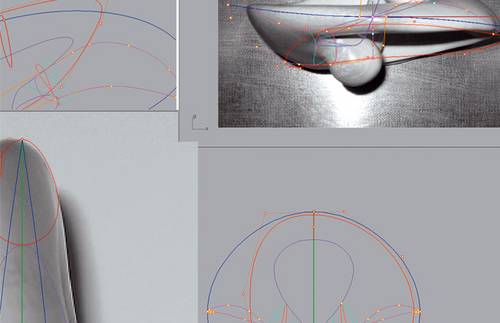 ANSELM REYLE
"The Construction of Harmony"

The Galerie Almine Rech is pleased to announce the solo exhibition of Anselm Reyle «The Construction of Harmony» . New sculptures and paintings will be presented in the whole gallery space, on the two levels.

Extract of the article « Anselm Reyle » by Jens Asthoff, in Flash Art n°249, July-September 2006 :
Jens Asthoff : In the 80’s and early 90’s artists became increasingly interested in appropriating historical styles. Do you see this as something close to your recourse to the pictorial forms of modernism?
Anselm Reyle : I think that I am interested in it from a quite different point of view. I don’t just want to take something up and present it as an available form. I deal with it more like objets trouvés that I come across because they fascinate me and then I intensify this fascination, and so want to show it. And I’m partly interested in styles as well because they are so well-worn, as in case of the stripe paintings. It’s such a simple principle, every art student must have used it at some time. And you’re usually told that it’s over and done with, that it was around in the 60’s and wasn’t even new then. And in the 90’s stripe paintings were taken up again, ironically, by people like Heimo Zobernig. But the irony isn’t the only thing I find interesting about it.
JA : When you appropriate things like this you exploit the quality of materials and color thoroughly, aiming at effect and alienating these traditional paradigms by raising the overall color temperature. You shift the adaptive element, the reference that can still be recognized or at least sensed, into a mixture of vagueness, emptiness and intensity. This leads to a quite specific, unique smoothness and neutrality that in its turn takes on the character of a personal style, your style.
AR : Yes, I am interested in a certain neutrality, on the one hand, but it has to be opened up and charged subjectively as well. I don’t see what I am doing as cold Neo-Geo art.
JA : Can you be more precise about this relationship between neutrality and subjectivity ?
AR : I operate intuitively. But working with assistants, for example, is good for that : I find this kind of working situation suits my approach. I have more time to make decisions, and it is also easier for me to make decisions. If I decide that a picture has to be done again, I don’t immediately see myself faced with a whole heap of work. This works best with the stripe paintings. Of course I decide what colors should be used, but beyond that all I do is add a few dabs of paint at the end or change one color. Here subjectivity is invested less in doing and more in deciding, which makes a completely different flow possible in the work overall. It also makes a difference to the position that’s taken up if there are only three stripe paintings or thirty or perhaps fifty. And then I am also fascinated by the abundant color, the variety of combinations. It is possible to paint a dark, depressive stripe picture, but also a bright, airy, summery one. Once you’ve done a picture, you perhaps have the next three in your head straight away. I only have opportunities like this if I am working with assistants. This too helps to create the special relationship between neutrality and subjectivity.
JA : But is that not different when dealing with free gestures ? Surely you can’t plan that in the same way ? Besides, I have the impression that to a certain extent you are pushing more individually against composition here, that you are interested in the question : From what point is something a picture, at what point does it dip over into being undefined ? Is that something about pictures that attracts you ?
AR : Composition is something I find questionable in terms of traditional abstraction. One is exploring the latitude afforded by the picture space, and then acting quite traditionally in terms of composition, and looking carefully to see whether a line is now ten centimeters further to the right or left. That can sometimes look quite pernickety, and I think ultimately it’s a matter of what you’re used to. I’ve always liked the element of simplicity in positions like that of Karl Otto Götz for example, the question of when a picture starts to be a picture : someone empties two pots of paint over a canvas, wipes over them three times, lets it dry and sells it to a museum. You can see it as simply as that. I want to reveal this simplicity. Squeezing out a tube of paint, going into it two or three times with the brush – that really fascinates me. And this might already be gone by the fifth line. I want to capture this moment, and at the same time show how questionable it is to assert that this is a picture. That wasn’t what artists like K.O. Götz were trying to do ; on the contrary, he was trying to perfect it. While examining gestural abstraction for myself I have noticed how little I am interested if someone has got hooked on their own gestures. That is a stanstill for me, a frozen gesture. I feel it’s dead. An artist like Götz was always pushing further and further into something like Zen Buddhist mastery, and it’s precisely that I want to get away from.